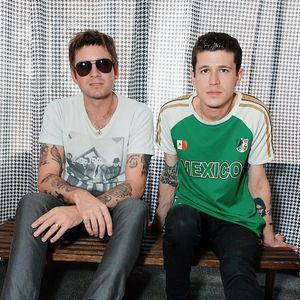 How do you write about a band that you have seen 11 times live without repeating yourself? Who cares! Friday night was my 11th time seeing my buddies, Crocodiles and they played my absolute favourite venue in Manchester- the Soup Kitchen. It’s a sweaty and dark basement venue; just how it should be.

End of April 2009, Crocodiles released their debut record. A record I bought by accident on the day it came out and since then, I’ve just fallen in love with everything they’ve done since. Every record has blown me away, and every show has done the same.

However, there is something truly special about their shows in Manchester that stand out. This was my 3rd time seeing them in Manchester, and I just love how you can see how much this beautiful city means to Brandon and Charlie. There was even a nod to local hero, Pete Shelley with their Buzzcocks cover which I’m sure he would have been proud of.

I stood directly in front of Charlie, and was in awe of his pedal set-up. It’s a piece of art, and he swings his guitar around like a machine gun whilst looking like a young Scott Walker. Brandon and Charlie have this way of just changing how you feel about their music when you see them live, and it is always a wonderful thing to witness. They are just of the most talented people I’ve ever met, and they just put their all into their shows.

You can’t help but shift your eyes across the stage to watch them all annihilate the stage. Brandon sings with this passion that is just astounding, and Charlie matches it with his effortlessly cool way of using his guitar as a weapon. As cliched as it is, they are just the coolest cats around, and it just shines through perfectly in their songs and their live shows.

The energy in the crowd is typical of a Manchester crowd, and just an absolute pleasure to be part of. The love that Crocodiles have for this city is just admirable, and something us fans here truly treasure. They feed off the crowd, and this crowd were reciprocating it. 10 years in, and they are still making music to lose your shit to. Songs like I Wanna Kill and Marquis De Sade, and new songs such as Exit My Head come more alive. I can’t ever get enough of hearing I Wanna Kill, and the crowd are the same. It’s one of those songs that just do something to you, and once you hear it. It’s an anthem.

Crocodiles are a band that you just don’t ever get tired of listening to, and watching. They have this way of just making you forget the real world for the time they are on stage. They make you want to start a band, they make you want to always be in the moment of being at a live show. As a fan, this is what I absolutely adore about music and how powerful it is. Also, Brandon and I had Bad Brains shirts on which anyone else would regard as a wardrobe clash. However for this, it’s just two people who love one of the best bands ever!

There’s a good balance of songs from all of their records, and sure I’d want them to play all of them but hey- that’s too much, I know! This was my first time seeing them on my own, and as someone who suffers with depression and anxiety I full on prepared myself to have some form of panic attack. I was wrong, I just felt totally safe at this show. Trivial I know, but small things like this help. Anyway, smushy stuff aside- it was just a brilliant show.

They are a band that just need to be seen live. Their live shows allow you to see even moreso just how fantastic they are. If I could, I’d see them on every tour at every date. But shows like Friday’s in Manchester are treasured dearly.

Crocodiles new record, Love Is Here is out now and they have 2 more UK dates left before a couple of shows in Paris this week.