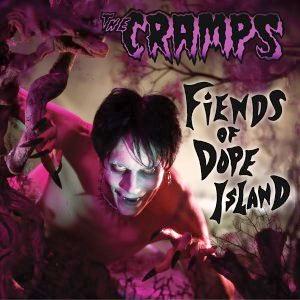 So here we are, the last record by The Cramps. In 2003, The Cramps released Fiends Of Dope Island- their eight full length record. It isn’t my favourite record, but thankfully it still has THAT sound that we all knew and love. The sound that defined them. The sound that made them so important and so influential.

I thought writing about all their records would have taken me longer than this. However, from the start I knew it was something I would have to see through. Besides, what else am I going to do with my spare time?

Fiends Of Dope Island opens with Big Black Witchcraft Rock. It’s a heavy song in comparison to what they have previously done. This record is a heavy sounding record and in some parts of the record, it doesn’t completely sound like The Cramps. I know a band shouldn’t make the same sounding record over and over. The Cramps never did that, but you always knew it was them. There is no fault at all in Ivy’s raucous guitar skills- you never could fault her or Lux at all.

There are some great songs on this record such as Dr Fucker M.D (Musical Deviant), Dopefiend Boogie and She’s Got Balls. It is still a brilliant record by them, don’t get me wrong. But I had a bit of a hard time getting into this one. I mean nothing is going to beat A Date With Elvis or Stay Sick! for me but it is still a strong record that sits nicely with their lengthy list of releases.

I love the slick sounds on Taboo, and how Chopper Franklin truly adds something special to this cover. It also shows just how fantastic Lux’s voice was. He sings slightly different on this one. It doesn’t typically sound like him, and I think that’s why this cover really stands out on this record. It is one of my favourite covers they’ve ever done also. I love Hang Up. It’s got Lux sounding quite snarly, and I really love that. I love how he could do anything with his voice. The way he’d sound like every part of him was shaking as he sung. The banshee-like wails he makes on the end of the song are just excellent. It’s one of the best moments on the record for sure. I also think Oowee Baby is one of the songs on the record that sounds typically them. It’s got a sound that reminds me a little of their earlier records.

I feel that Fiends Of Dope Island is slightly darker than their previous records. This record does feel quite heavy. I don’t know if they knew this would be the last record they were going to make or not. It’s hard to tell.  The artwork to the record is creepy. Lux has this demonic look, and it kind of gives you an impression of how they wanted this record to sound. It is dark and it is menacing. I don’t know how this record sits amongst other fans of The Cramps. I’ve played it a few times in a row now prior to writing this and it has grown on me. I really love Dr Fucker M.D- there’s something brilliantly eerie about this song. It sounds like something you would hear playing in a horror film. You can imagine Dr Fucker being this wild doctor who just causes absolute mayhem.

From listening to all of The Cramps records, it has just made me love and appreciate them even more. No other band is ever going to make something as wonderfully sleazy as I Want To Get In Your Pants or something as decadent as Kizmiaz. The Cramps were one-offs. Every single record shows that, and maybe they knew with Fiends Of Dope Island it would be their last. I think they did set out what they had and needed to do. Of course we would have taken more. I wish I was one of the lucky ones who got to see The Cramps. Any line-up, I don’t care. I’d have just loved to have seen them.