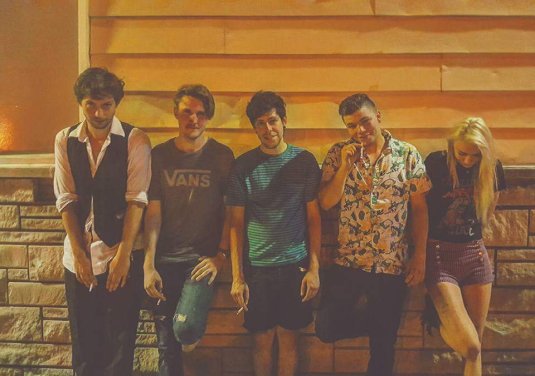 Taking a break from my Costa Rican Garage Rock obsession, (please do feel free to send me more bands!) I’ve found a band from Indiana that make something that sounds like a cheap Horror film. I love them, and I hope you do too.

The Dracu-Lahs are made up of five friends who make scary music for us weirdos. They make the kind of music that would fit nicely in a horror film from the 60s. There’s this pretty cool atmosphere in the music that makes you think that maybe they aren’t real people; maybe we’ve dreamt them up and off they go into the night looking for prey.

Ooey Gooey is probably my favourite song so far, the title alone was enough to have me hooked. It’s a brilliant Garage Rock kind of song, but there’s something about it that makes you want to grab someone to make them learn the words with you, and you just shout the lyrics back and forth at each other. It’s a really great song, and it’s a pretty solid song to listen to whilst roaming the streets on your own just killing a bit of time.

Their bio states that their sound is, “Lo-fi horror garage fuelled by whiskey” which is a pretty accurate description of them. They sound like drunken vampires who feed off whiskey when there’s no more blood left to drain. It’s a perfect description of The Dracu-Lahs, and they really do have this solid raw sound that makes you feel you are watching them in their rehearsal room as they go absolutely apeshit. If you listen to the song Ants, you’ll get what I mean. It’s a completely wild song and you can sense how out of control they are when the music takes over, and I’m fairly sure that this is something that seeps into the crowd when at their shows. You can’t help but want this band to utterly possess you.

The Dracu-Lahs earlier songs are a bit louder and more brutal on the ears, and that’s something I really love about them. There’s this addictive angst in their earlier music, but don’t get me wrong- it’s definitely still there. This rage that comes out in the music just makes you want to break shit- even the stuff you probably shouldn’t break. Nothing is safe nor sacred when you start blasting out The Dracu-Lahs.

Never Have I Ever is one of their earlier songs that sound a bit like Wavves when Nathan was starting out. There’s this really cool Surfer Rock sound going on, but there’s definitely something Punk about the song. From their earlier songs, this is one I definitely love the most but honestly they’re just a great band who have such a big and mesmerising sound. I can’t get enough of them.

They make it sound so easy to play these kind of songs and to just take the listener deep into the underworld, and it’s most apparent on the song Succubus. They remind me of Misfits and The Cramps a little bit; brilliantly noisy and creepy. I just love them, and I love music that can freak me out a little bit. Their sound just gives off this real rowdy feel and you cannot help but let it all take hold of you. Again, they are a band that you’ve just got to play loud. The drums are ridiculous- so powerful and insane. I love how they dominate the songs at times to give off this sense of urgency. I love when a band does this.

The Dracu-Lahs are such an exciting band, and they have such a great DIY feel to their music. That’s just one of the many things I love about them. An absolute pleasure to listen to and write about!