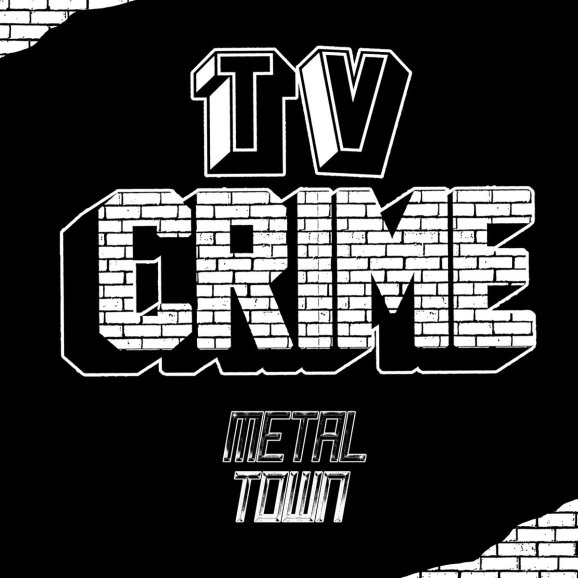 I have had a bunch of records I have wanted to write about, but just couldn’t bring myself to do so. I lost my best friend- my beloved Gran on the 23rd August. Since then, everything has seemed utterly pointless. I can’t make it through the day without crying or having a panic attack. I may write about music again soon, or I may not. I have no idea. Maybe I’ll use it as a distraction. I have no idea.  I’m attempting to push through it to write about a record I have been SO excited for; Metal Town by TV Crime.

TV Crime are fronted by one of the coolest human beings around- Shaun Hencher (he fronted VIRALS, and if you weren’t a fan of them- why the hell weren’t you?!) I’ve written about TV Crime a bunch of times, but I’m super excited to write about their debut full length record which has been released via the equally phenomenal Alien Snatch! Records (fun fact: they have never released a bad record!)

Metal Town is a record that you cannot help but play insanely loud. It’s got a strong 70s Rock feel to it, but there’s also this Garage Rock feel. I know a lot of bands fall into this category, and they don’t back it up. But with TV Crime, they make you feel like you’re truly watching this band rehearse in a garage or sweaty basement room, playing with all they have. The record doesn’t sound polished in an overbearing way. It sounds like a band who are sure of themselves, and have created something that they (understandably) are proud of.

As a huge fan of theirs, I am so proud of what they have created on this record. Take songs like Can’t Remember Your Name and Neo Waltz- they really have this 70s Rock feel that bands like Amyl and The Sniffers have given us. The two bands are responsible for some of the best music around, and have been for the past few years.

TV Crime aren’t afraid to absolutely push themselves on this record. If you want to compare them to Shaun’s old band VIRALS, then that’s on you. But just so you know, they sound nothing alike. Shaun’s vocals on this record are so strong, and there’s this beautiful roughness to it that just makes you want to try snarl out the words like him. Luke absolutely destroys the drums with no hint of an apology found- just how it should be. This is prominent on songs like Clocking Out and In The Gutter. The title track of the record though, shows us just how brilliant this band are. It’s under the 2 minute mark but don’t let that deter you. In that short time, TV Crime show you that they aren’t to be messed with. TV Crime are the kind of band that make you want to ditch everything, and just follow them on tour.

Something to just adore about this record is that the 13 songs take you on this voyage through the wonder of music. They have evidently put their all into this record, and every single song on this record justifies why this is one of the most incredible debut records I’ve heard in a long time. I knew that I was going to be blown away by this record, but the level of greatness on it is truly something else. At the moment, I think I am calling Television Crime and Never Been In Love  as my favourite songs on the record, but I’m likely to change my mind because a record this great doesn’t happen that often you know. I love how it just embodies everything I love about music, and it has this unfiltered Rock ‘n’ Roll sound. It’s an honest record with a Punk heart, and for me that’s more than enough to make me fall in love with it.

TV Crime are headed out on a tour of Europe in the next few weeks, so please go see them if you can. Hopefully they’ll make their way to Manchester soon. Until then, I’ll keep playing this record as loud as I can and as often as I can.