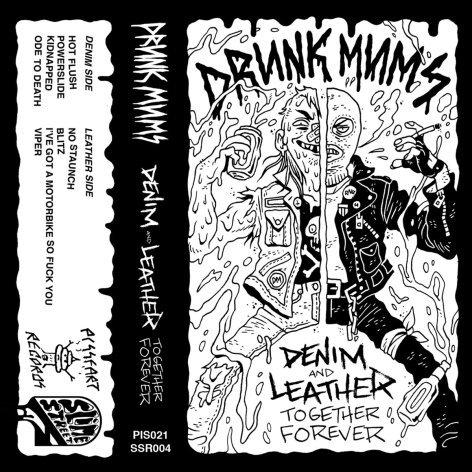 After spending too long trying to find something to write about- I’ve settled on the new Drunk Mums record, which has again been released on the great Pissfart Records. If you’re looking for something real rowdy to play disgustingly loud to piss your neighbours off with, then this is your record. Or, maybe you’ll play it loud enough to make them a fan.

The record came out about 2 weeks or so ago, and I’m stupid for not writing about it sooner. It’s one of the rawest Punk records you’ll hear this year, and with this slowly coming to a close- it’s safe to say it might just well be the loudest.

Drunk Mums have made a record that just makes you want to trash the place. The songs are short and like someone has smacked you round the face a few times. The songs will leave you feeling battered and bruised, and we need these kinds of bands. We need bands to kick some life into us, and fortunately Pissfart Records is one of those labels that constantly put out records that do this.

One side is made for you put your best denim on, the other is for your leather. If it smells a bit and is ripped a bit- then put it on, and play this record loud. I love how they remind me of Dead Boys. Ode To Death is one of the greatest modern-day Punk songs. It’s got a feel of the Sex Pistols slightly, but the vocals are gritty and remind me so much of Stiv from Dead Boys. It’s my favourite song on the record. I love how it has a real Punk sound to it, and puts everything else you’ve ever heard to shame. It’s got the brutal smutty sound that is on I Wanna Be Your Dog by The Stooges. Just play this loud. And on repeat.

The songs rip right through you and feel, and sound like nothing else. The Leather side of this record is a little heavier with a bit more aggression in the vocals. This record absolutely shows us what Drunk Mums are made of, and Pissfart Records are kings for putting out consistently great records. Denim & Leather Together Forever is such a fantastic record, and I know it’s only been out a few weeks, but it really needs to be heard by any and everyone. Especially those who are into this kind of noise.

For those days where you just want to blast out something really loud and obnoxious, Drunk Mums have got you covered. They aren’t going to take you by the hand on this one, oh no. They are going to grab you by the scruff of your neck and lob you right into the pit of the glorious world they have created with this record. It’s honestly one of the best records I’ve heard in a long time with this sound. It just gives you this feeling that you know, whatever anyone says- Punk will never ever die. It can’t, it won’t- especially because of Drunk Mums. Are they our saviours? Probably.

When I wrote about them at the start of the year, I had no idea what they would hit us with. Turns out they’ve got the best named song of the year, ‘I’ve Got A Motorbike So Fuck You.’ Not only is a great title, it’s a brilliant song. Just use it as a comeback for anyone who’s pissing you off. Who cares if you’ve got a bus pass and not a bike; no one needs to know.

Denim & Leather Together Forever is an exceptional record- trust me on this one. They need to bring their live shows over here. Something tells me that this record live would just be totally wild. The record ends of Viper, which has this heavy feel that makes you fall in love with the band all over again- making you start the record all over again.

In short, Drunk Mums have made the best Punk record of the year and Pissfart Records are just phenomenal at what they do.

Buy the record, sing a long, get your denim and leather out- and play this record LOUD.