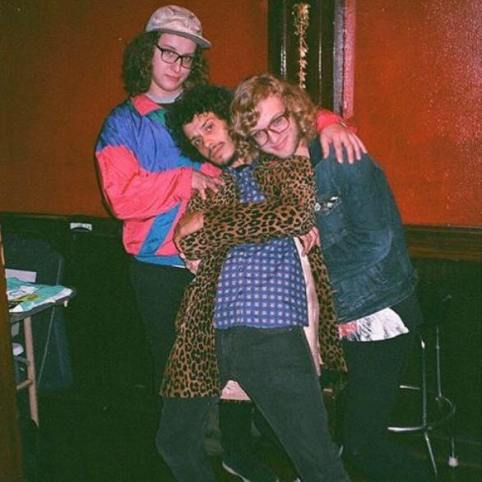 Have you ever wondered who the greatest band from Indiana are? Have you ever sought out a band that are a cult? Course you have.

Dope Sweater are a cult don’t you know, and they are also the greatest band from Indiana. So for all you lover of The Cramps, Night Shades and those in between- Dope Sweater are for you. They’ll give you the creeps and they’ll also give you some amazing music that’ll send chills down your spine. Ready? Alright.

Dope Sweater have been going for a few years now, and they’re one of those bands that once you listen to- oh there’s no going back at all. Maybe they’ll give you the heebie-jeebies, but it’s worth it. Their sounds have a part Psychobilly, part Garage Rock sound. I just love them. They are entirely chaotic and off the wall. I love how manic their songs are and how they give the impression that their live shows are just as ridiculous. I bet they’re a band that cause crowds to leave the venue covered in all sort of fluids and broken bones, and heavily bruised. The way their sound is out of control is something to really love and enjoy. You can’t help but be happy when you listen to them, they’ve got this real infectious loud sound that makes you feel like you cannot get enough of it. You simply can’t get enough of their sound, and that’s where the cult part kicks in.

Dope Sweater are wild. There is nothing about them that makes you want to calm down and take a nap, or whatever.  Their boisterous sound is incredible, and I love that they keep you guessing on where they are from and when they started. They have this mystery about them that reminds of The Mummies. We all know that The Mummies and The Cramps are two of the greatest bands of all time, and the cool thing is that Dope Sweater remind me of both. Their totally wild and unconventional sound is an absolute joy to listen to. Once you listen to them, that’s it. Nothing will be the same. I Get High is probably the song that’ll have a hold on you. It’s one of my favourites, and I hope you love it too. It’s got a partial surfer rock feel to it but at the same time you feel Poison Ivy has come along with her guitar to cast a spell on you. I love how they can take the same eeriness that’s in The Cramps but make something completely different. There’s a lot to love about Dope Sweater, and it’s something I can’t get enough of for sure.

Their earlier songs are full of insane screams and drums to totally rip your eardrums apart. They have kept that same loudness in their earlier songs and evolved it into something else, but you just know it’s them. They’ve got a real raw and distinctive sound that of course, you’ve just got to play loud.  There’s a bunch of really cool demos on their bandcamp page, and if you’re new to Dope Sweater- I’d start with them. After you’ve gone through them, it’s up to you how you want it to go. You can either go back and listen, or start with their latest record which is called, Must Be Destroyed.

Basically, what I’m trying to get at is Dope Sweater are not just the best band from Indiana but the world. I hold them that highly. If anyone wants to send them over here for a UK tour, I’d appreciate that. I’m sure they would too.