“Picking off what’s left of the rest of us,
And selling it off to the wolves.”

As I started listening to Designer Mutts, I was distracted by something utterly hateful and vile. There’s small-minded pricks out there who have made a page on Facebook called “Ban Islam.” It is a pity you cannot ban small-minded and disgusting people; such as those who made the page and also those who agree with it. It just made me dislike people even more than I wish to. It was heart breaking to see photos of a young Muslim man praying and vile creatures taking it upon themselves to make vicious comments. What hope do we have? Maybe we truly have none left. I don’t think I can put into words how angry this has made me feel. Thing is, people will always have these warped views. For now there is nothing we can do. For now.

Moving on to something a lot less harmful; Designer Mutts are two lads from my favourite Australian band, Royal Chant. The lyrics to their songs are perfect. I’m obviously going to say this because I have massive love for lyrics. I read the lyrics to the songs before I hit play. The thing is, it isn’t the words they write but the way Mark sings them. He sings them in a way that causes you to immediately connect and feel as if it is YOUR life he’s singing about. Maybe he is. I feel that way whenever I listen to Royal Chant, and also Designer Mutts. There’s a wealth of frustration in the songs that is infectious in the most pleasing way imaginable. These songs were made for you to scream along to in your room, without caring if anyone hears. Maybe you want them to hear your frustrations also; get them to join in. Designer Mutts aren’t made for sacred listening. They are made for you to play as loudly as possible.

The essence of hopelessness is something I really love in the songs. To some that may sound morbid, but when you’re from a place that lacks culture and ambition- these are the kind of songs that save you. Fortunately, some of us are able to leave. The best part of leaving a place that has drained you behind is knowing that you never have to look back. When something or someone destroys you, all you can do it rebuild. Nothing nor no one is worth being a wreck over. Music heals, music is the truth. 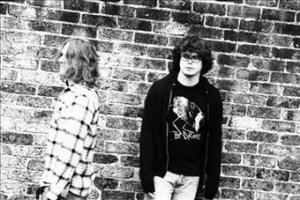 My favourite track off their debut release, A Day At The Wauchope Races is a song called Unrecognizable Blues. I adore the pissed off sound in Mark’s vocals. The lyrics alone stand tall, but his voice just seriously makes it. Designer Mutts play with such fury and fight. You cannot help but feel they are in the midst of leading you into a revolution (or maybe a resolution) and you stand in front of them echoing their thoughts and words. This is how powerful they are. This is how powerful music can be, and should be.

I find it easy to write about them because to me, they’re more than a band. They’re friends. Friends I’ve yet to meet (distance is a pain!) but I’ve read some of the things Mark has written. As a lyricist and just on his blog, and it is like someone has ripped my thoughts out and put them down in an eloquent manner with a touch of rebellion.

Designer Mutts doesn’t deserve to be compared to Royal Chant. Some of the same members are in the band, but that’s it. Completely different otherwise. I guess though, one other thing they have in common in this honesty in the songs. An honesty that is rare. These guys aren’t afraid to bare their soul and let every feeling; regardless of how ugly it is, be known. Their debut release is something I hope they are deeply proud of, I know I am.

You can listen to A Day At The Wauchope Races here: http://dirtymabrecords.bandcamp.com/album/a-day-at-the-wauchope-races