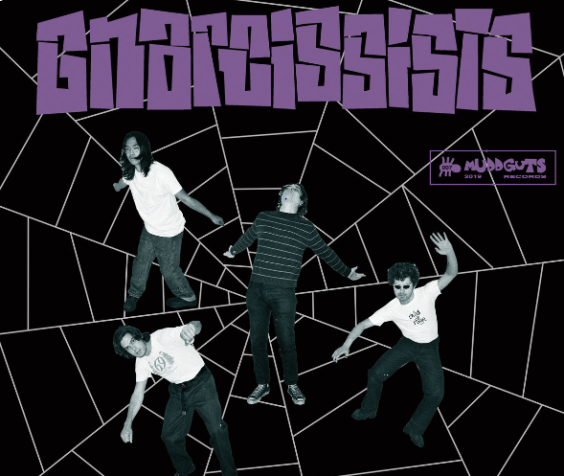 I think I may have found a band that perfectly capture everything I love about music, and the sounds of the bands I really, really love. I’ve said this a few times, and I always mean it. I just really love music and I’m pretty sure I’ve found a band here that just reinforce my love for music yet again.

Gnarcissists are truly great; they remind me of The Gruesomes and all that good stuff. The bands I absolutely adore and cannot live without. They have this excellent sound that is yet again making me wish I could play guitar or something. I’d love to do that. I’d want to be like Johnny Thunders mixed with Jamie Hince and Gemma from Savages. I’d want to be loud and hold the guitar like a machine gun and it’d give off insane sounds that would deafen anyone who heard me. But I live through the bands I love, and I love Gnarcissists. They have this proper feel good atmosphere in their music, and it just makes you want to forget daily life and go do your thing. If I was a beer drinker, then I’d say this is the best band to drink beer to. It’s not like we’re allowed to leave the house at the moment are we, maybe that could be a new hobby.

Their most recent record came out in November and is really great record. It’s got songs on there that will make you just want to play it loud and lose your mind. They have a really tight sound on the Caught In The Webb record and it sounds like something you’d expect from a band that have been around for decades! I have no idea how long they’ve been a band or how many records they’ve put out (I’m just going by what’s on Spotify and Bandcamp) but what I’ve been listening to is nothing short of mind-blowing. I love the snarly vocals; I love the filthy music and how it sounds like some sordid back alley affair. It’s a really out there sound, and it’s one you wish you could be part of constantly. I’ve got a feeling that they are another band that are made to be seen live. Imagine their shows! They would be so wild.

They’ve got some catchy numbers such as Celebrity and Fentanyl- both of which has a really strong Punk sound that makes you feel like you are definitely not listening to a new band! I love that retro kind of feel going on, and how they truly do experiment with their sound. There are times on the Caught In The Webb record where you feel like you are listening to band become stronger in each song. If you play it in order, you’ll definitely get this coming through. You don’t get that very often, and bands like Gnarcissists are to be treasured. I love, LOVE their song Suffocate and how the lyrics are a bit self-deprecating, but they’ve got this Dead Boys and Sex Pistols feel to it. Obnoxious Punk at its best. The vocals on this are my favourite on the record so far. Once I play the record a few more times, I might change my mind but for now I’m really taking in how that snarl gets you right in the gut. It makes you want to scream the song back.  Everything in the world is quite throwaway and everyone wants to consume more and more of the things they love, constantly. But when you have bands like Gnarcissists you can really take in how great they are. Everything about their sound just makes you want to escape deep into their world and be properly part of it.

On Veut Juste and Buzzin are two other really strong songs to pay close attention to. Their first EP was just a little taste of what was to come and Caught In The Webb just threw them into the unknown and made them the best at what they do. If you’re looking for some rough round the edges Punk in all its beautiful glory, and a Garage Rock band with the kind of attitude you wish you could possess- then Gnarcissists are for you.

Their songs were made for us all to sing along to. It doesn’t matter if you’re alone or self-isolating with your cat for the foreseeable; this band will make it a little bit easier. You’ll be singing along to PCP in no time!