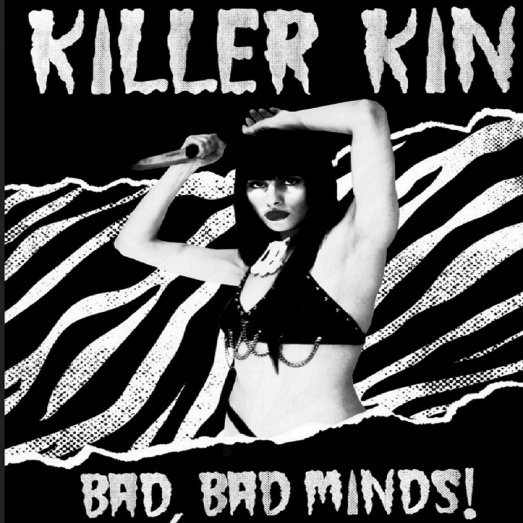 Sometimes you need some pure smutty Garage Rock to get stuck in your brain and to seep into your bones, and just move you. I think… no, I KNOW that Killer Kin are that band. Earlier this year they released the exceptional Bad, Bad Minds! record and it everything you’d want from music and beyond.

Killer Kin are an incredible band. They are exciting and all kinds of bizarre- they make the kind of music that Lux Interior would get excited over. The kind of music that John Peel would have been in love with. They’ve got a New York Dolls bite about them, and this attitude is throughout the songs on the record. The record reminds me of The Cramps mixed with the New York Dolls, and for me that’s the ideal sound. There’s this Glam Rock and Psychobilly feel to the record, and the vocals are ridiculous. They are completely off the hook and you cannot help but wish you could sing like this! If you’re looking for a band to make you happy, you’re alive- listen to Killer Kin. It’s totally wild record, and I hope it makes them HUGE! They deserve it. I don’t know how long they’ve been around or how many records they’ve made. This might be their first? I have no idea, but I do know that is it out of this world. They have a sound that I absolutely adore, and I cannot get enough of it.

Bon Vivant is the one to really melt your brain; it’s such a heavy song, and for me everything on this song just shows us why this band are truly the ones to watch. THAT guitar solo on this from like the 2-minute 15 mark is mind blowing. You can’t help but feel you’ve gone back in time but also stepped into the future with this band. I love them, and I love this record. Can you tell? Bottom Feeder Blues and Bad, Bad Mind just show us how phenomenal this band are- they’ve got this gorgeous aggression in the sound. It’s the snarliness, it’s the smuttiness, the pure filth that’s in every single song that has you hooked. I want to live in the world they’ve created on this record. Killer Is King may be an ode to Arthur ‘Killer’ Kane? Forgive me if I’m wrong, but its sure sounds like it. You can truly hear the New York Dolls influence on this record, and to have something specifically for Arthur is beautiful. Like I said, I could be wrong but, in my head, it’s all for Arthur and I love that. Afterall, Killer Kane was a King!

With only 5 songs Killer Kin have made a lifelong fan out of me. With only 5 songs they have really made an impact that most try to do within 5 records of their career let alone 5 songs. They have this feel to their sound that makes you instantly know that their live shows are probably beyond description and unlike anything else you’ve seen or heard before- much like how they are on record. I really hope we get more from Killer Kin because they are so talented and unafraid to tamper with what most shy away from. This sheer decadent sound is beautiful and hypnotising; you just want to be constantly immersed in it. For me, this is the kind of noise that makes me love music so much and makes me want to write about it.

All that’s left for me to do is urge you to get your mitts on this record and lose yourself in it. So far, this is one of my favourite discoveries of the year and I cannot wait to hear more from Killer Kin.