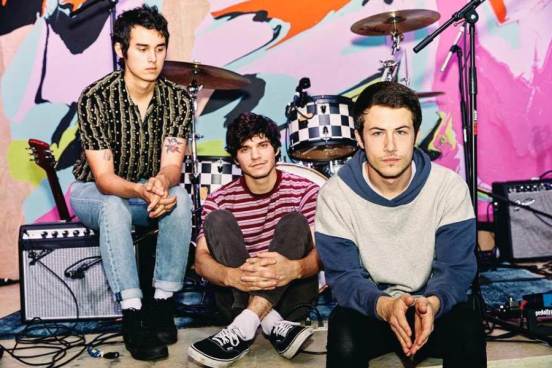 The crowd at tonight’s show consisted of mainly teenage girls. As soon as Wallows stepped on the stage, the venue was deafened with screams that could rival a One Direction concert. There would have been a time where this would have annoyed me, but tonight it was beautiful to hear. A couple of hundred kids in this room watching a really great band. A lot of them were with their parents, and it may have been their first ever show. A pretty cool first gig if you ask me. I was stood behind a dad and her daughter. The dad was wearing a t shirt of The Smiths (which alone is great!) and was singing and dancing along with his kid. It was a beautiful moment. Some kids would be embarrassed, but there was so much love there. It was beautiful.

Nothing Happens is the band’s first full length record. It is made up of songs that sound like The Smiths meets The Cure and dives right into The Strokes. Personally, I love it. Three bands I love, and Wallows have created a sound that is equal parts L.A. and 80s Manchester via New York and the South of England. Maybe that’s why this crowd were absolutely brilliant. There’s something about Manchester, and given it was Wallows first time playing here- it most certainly was a night to cherish. Manchester crowds never disappoint, and they created such beautiful moments tonight.

The set opened with Do Not Wait which is by far my favourite song off Nothing Happens, and probably my favourite Wallows song. I love the depth in the lyrics, and I love the angelic yet grand sound in the song. Dylan’s vocals on this one are something else, and he truly does it justice live. To have them open with such a big song was great, and it only got better.

Songs like These Days, Pictures of Girls and Are You Bored Yet? are probably sung louder by the crowd than the band- but everyone is just so taken with it. There is something about Wallows that makes it so easy to fall in love with their sound. I loved how the crowd sang Clairo’s part on Are You Bored Yet? Braeden and Dylan share vocals throughout the set, and their voices compliment each others so well. When they need to be gentle, they truly hit you with the fragility in the tone. But when they need to ramp it up and be rough with their tone, they deliver it effortlessly.

With only one full length record and an EP to date, they had no problem selling out shows. This show was originally at the Deaf Institute but got upgraded. To be honest, they could have easily sold out The Ritz or the main Academy next door. That’s for next time though, and there definitely will be a next time.

Wallows give you more than a show. They are the best at what they do, and let it be known that Cole is one of the best drummers around. The band have got a lot of soul, and a lot of heart in their music. Their lyrics are relatable and their songs are just blissed out gems that you can’t help but continually to fall in love with.

The set closes with Scrawny. This song has my favourite line of the year, “I can still have wisdom and look like a child.” I can wholeheartedly relate to this, and it’s such a great song. To see it live just gave me a new appreciation for it. I cannot wait to see them again. I really can’t. My only downer is that they didn’t play Uncomfortable, but hey- the show was just perfect and the set just showed us why they are not only a great band and musicians, but also one of the most exciting performers around. They all have this beautiful energy, and create this atmosphere that you cannot help but soak up.

I hope kids that were at this show end up starting their own bands or something, and use this show as their blueprint or something. It was perfect. Manchester truly embraced Wallows tonight, not just because it was their first time here but because this is the best city in the world!