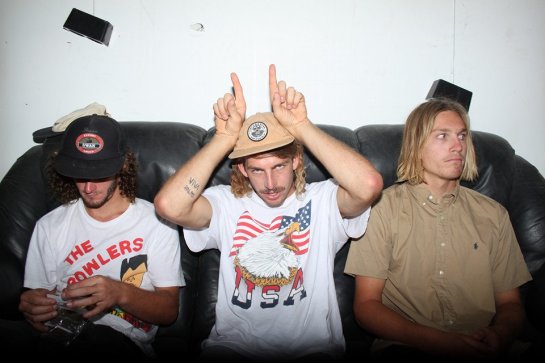 For the past three or four years, Australian Garage/Punk kings Los Scallywaggs have been treating us with their insanely great music. They truly bring a sense of anarchy and Garage Rock delight to us all. They’re the kind of band that makes you want to drink beer before 12pm and waste your day napping and eating pizza. Sounds pretty ideal, right? Their sound is everything you’d want from a Garage/Punk band, and the way they totally control the listener with this brutal sounds is something to be in awe of.
With any great band like this, being able to make the listener feel as if they are at one of their live shows covered in god knows what is something you look for. You want to be able to feel like you’re in a stupidly cramped space that has no air-con, and smells like warm beer and decade’s old sweat. The sheer rawness of Los Scallywaggs makes you automatically feel like you’ve been transported to the best show of your life. If you caught them on their EU/UK tour this month, then you’re pretty damn lucky. Sadly, there wasn’t a Manchester date but hey, next time right? They played the Shacklewell Arms in London which is the kind of venue that is made for a band like Los Scallywaggs.

With a name like Los Scallywaggs you’d probably think that these cherubs have songs that are for ruffians and the like. They probably are, and that’s a pretty cool thing. They have this raw feel to their music which makes you feel as if you’re there whilst they are practising, and I think them having this sort of vulnerable (I don’t mean in an emotional way with this) style makes them easy to love. The songs are so bare and raw, and hearing them in this way is so good. There is nothing about them that is over-produced or bland or repetitive. They’re effortlessly cool. You know when you hear a band and you just think, “How have I gone this long without listening to you?” well, that’s what you get with these guys. They make you feel like this is the band you’ve been waiting for. There are a number of places that are giving us some amazing Garage/Punk bands right now, and Australia is definitely up there.
I have about 20 minutes left of my dinner break at work, and I made sure I had enough time to write about my love for this band. I love how noisy they are. I love this fuzzy almost Shoegaze-y like sound they have- their sound however, does go beyond what you expect from a typical Garage/Punk band. There’s this awesome hyperactivity in the song R.I.P which is up there as being one of my favourites. They sure know how to make really dominant songs that take you totally over. You can waste your days doing a whole load of nothing whilst listening to them, and it would feel like the best day ever. There is something really joyful about them and that’s part of my love for Garage Rock bands- there’s this unconventional joy in the music that just makes you forget anything bad has ever happened to you, and the world.
These three cherubs are such a joy to listen to, and the way they can create such a wonderful noise is pretty damn cool. I love how the song, Day That I’m Dead reminds me a little of What’s Your Problem by The Gruesomes. The Gruesomes are of course, one of my favourite bands EVER, and to hear a band have that thing about them that got me hooked onto The Gruesomes is an absolute pleasure to hear. I have no idea if The Gruesomes have been influential to Los Scallywaggs but regardless, they’re brilliant and do at times, make you feel like you’re not in 2018 which isn’t always a bad thing.
Los Scallywaggs are the band to really stick with if you want to hang on to that summer mood a little while longer. They’ll always make you feel like you’re at a skate park or at the beach on a summers day watching the world go by. I feel like the song American Dreams is the best song to do all this, and more to. I love how rowdy it is.

I seriously cannot get enough of this mind-blowing band. They have everything and more that I look for in bands, and they really hit you hard with their astounding talent. The songs are massively catchy, the vocals are on point and the music will make you want to totally act out- so do it!
If they come to a city near you, make sure you go see them. Stand by the speaker and let yourself go a bit deaf from their filthy Garage/Punk sound that you’ll never be able to get enough of. They’ll just make you keep on craving more and more. That’s when you know you’ve found a really iconic band.