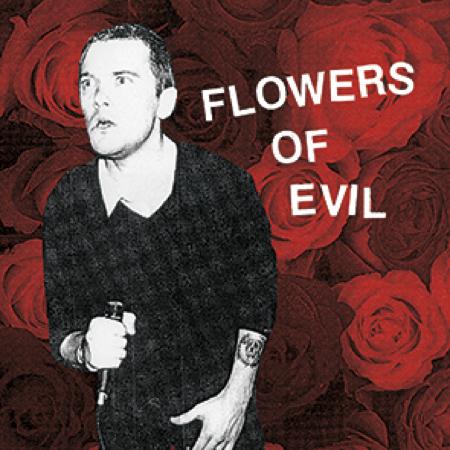 For the snotty and depraved shitheads of the world, Flowers Of Evil are here for you. They will spit in your eyes, kick you in belly and deafen you with their loud and aggressive sound.

Spat out into the world last summer in New York City, Flowers Of Evil have just released their debut self-titled record on Deranged Records. It’s the soundtrack for bored youths and adults. Unleashing 20 minutes of filth and fury on their record, is there a better sound? Not at all. It’s brutal and infectious. David spits the lyrics out with urgency and venom. With no social media presence, these guys are doing things the right way. A proper punk ethos flowing through their music which makes you think you are anywhere but 2015.

The only bad thing I have to say about their record is that it only lasts 20 minutes. However, you’ve got bands like the Ramones and Girl Tears who can rip your face off in a minute and half song. Time isn’t always everything. Flowers Of Evil will cause riots and brawls (hopefully) at their shows. Throwing careless but not malicious punches in mistake for dancing, that’s totally fine. They’re currently on tour in America, so maybe we need to start a petition to get them over here.

The band consists of musicians who are in equally brilliant bands who obviously, I am a fan of. The thing is, Flowers Of Evil sounds like a band born decades and decades ago. They’ve got the fight and fury in them that’s found in bands like Black Flag and the rowdy sounds of The Ruts and The Damned. Basically, Flowers Of Evil sound like my dream band. They’re basically my dream line up anyway. I love how they’ve got this attitude in their music that reminds me of the Dead Boys. If I was an angry 14 year old, I’d hear this record and go start my own noise. I’m 28 with no musical talent, which is why I write about music I really really love.

You get the impression from this record that their live shows leave the crowd going covered in blood, sweat and booze. Like I say, if you haven’t left a show without some kind of injury, you’ve not had a good time. You can picture the crowd losing their shit over Flowers Of Evil, and rightfully so. I’ve been waiting a long time for this record to come out, and now that it is finally here I really cannot praise it enough. It is full of wonderful fuck yous and fuck offs. It’s the perfect record to play when you want everyone to just go get fucked off for a little while.

You can get yourself a copy of this rambunctious delight right here:

Any band that names themselves from a Baudelaire poem has got to be wonderfully depraved, right?