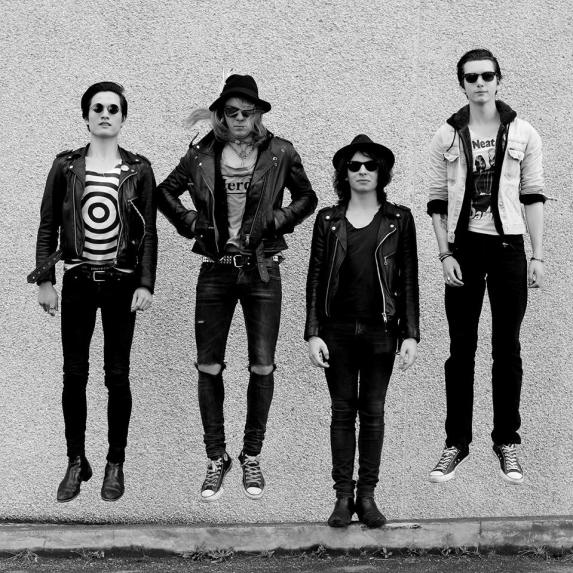 Completely late with this one- 3 years late in fact. Better to be late than something profound, I guess. Anyway, it’s worth the wait- trust me. Unless you’ve already heard this record, then you can just be disappointed in how long it took me.

Paris has given us some amazing musicians and bands. One I will always write about is Dr Chan. I love that band so much, but there’s another band from the fine city that have the same fury in their sound and that band is WHACKS. They are loud, chaotic and a real pleasure to listen to. They make you want to waste your days away doing nothing and not feeling bad about it. I have a day off work tomorrow, and I’m not going to feel bad at all for doing nothing.

Their record Whatever Man, I Don’t Care! came out in 2016, and it is such a great record. It’s got everything you’d want from a modern Punk/Garage Rock band. They’ve got the same energy as bands like The Chats and Skegss. They make you feel like you’re front row at the most chaotic show imaginable. It is such a great feeling, and WHACKS are such a brilliant band. I have no idea what they are up to or if they are still making music (I really hope they are) but what they’ve done on this record is something that just makes you want more and more. There’s only so many times you can play something on a loop before you think, “I need more right now and something different.” WHACKS have such a strong sound that makes you wish you could create something this tight and ferocious.  I love their song Agitated, I love how hyperactive it sounds and how you feel a bit twitchy listening to this with the burning desire to head out and do something. You cannot sit still to this record, and that’s part of the charm of WHACKS.

WHACKS have thoroughly perfected a sound on this record that is entirely theirs, and you cannot help but fall in love with it. It sounds like all the bands you love, but at the same time they take you off into a totally different direction. You feel like you’re wandering the streets of Paris looking for things to do or just hanging out at a skatepark watching the world go by. This is a record to play as loud as you want, and as often as you can. It is such a relatable record- for those of us who are a bit self-deprecating or whatever, this record will get you in the gut. There is so much to love on this record. You cannot help but be taken by the vocals, but the drums and guitars are like this rambunctious force that cannot keep you still at all. It’s such a rowdy record that you just must play super loud. Their sound is heavy and a bit like Nirvana meets the Beastie Boys in a way; and that’s a pretty solid sound to have. I think the record closer, Hello evokes this the most. It’s a great closer and one to play when you’re a bit pissed off at the world or whatever. There’s angst on this record that is so well put across, and I think Hello is the song that really gets this across the most.

Sugar is the one you need to keep on playing, and to shout the words back. Can someone bring this band to the UK because they are a band that will put on an excellent live show for sure. If you’re looking for a band to spill your drink to and jump along with- this is the band for you. WHACKS are everything you want from a band who aren’t afraid to just scream their lungs out and play as if their lives depend on it. Sugar has so much going on and it is probably my favourite on the record (for now. I will change my mind because it is such a great record!) There is something special about WHACKS. They’re like a Garage Rock version of the Beastie Boys- basically, they’ve got that rebellious streak that just makes you want to cause a bit of trouble. I think this is more apparent on Step Up, Stand Out. It feels like an anthem for the lost ones who just have no idea what to do but are happy to kill time doing nothing.

The more I listen to this record, the more I want to hear from them. Maybe we will get something new from them. Maybe they’ll even come to the UK one day- who knows. All I know is that this record was a joy to listen to, and to play loud enough to drown out the rain hitting the windows this evening.