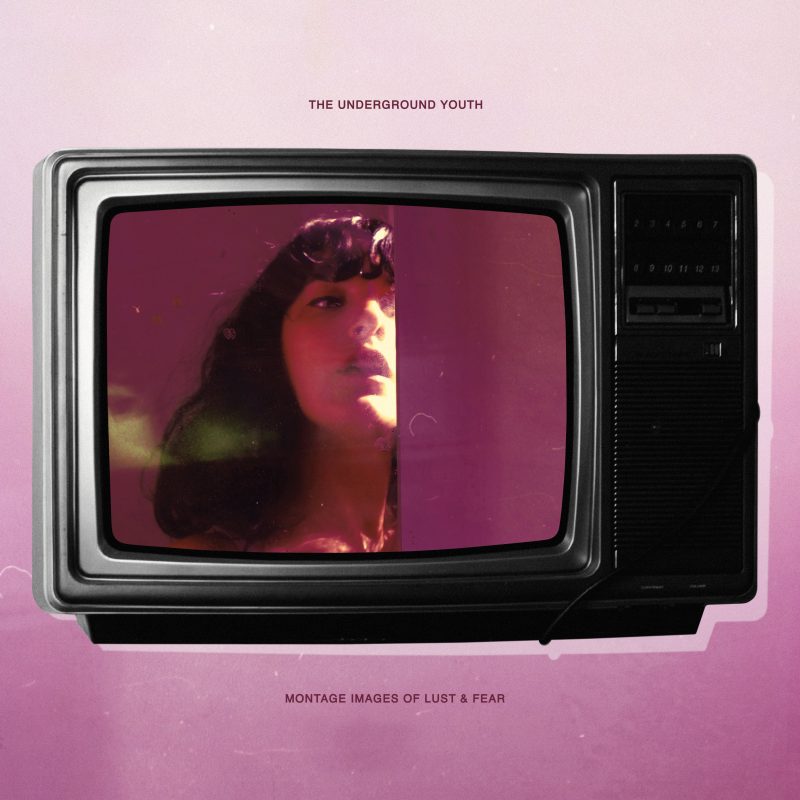 The Underground Youth are such an incredibly underrated band, and with each record they have this ability to just shock you with their sound. A sound that is in no other band you’ve listened to, a sound that you cannot get enough of. The Underground Youth have yet again, put out another exquisite record. A record that pierces right through your heart and soul. A record that must be played obsessively.

Montage Images Of Lust & Fear is not only a great name for a record, but it totally sums up the atmosphere on this record. I’ve been a fan of The Underground Youth for a stupid amount of time, and I remember seeing them live a couple of years ago, and I was just in awe of their set. Easily one of the most impressive bands I’ve ever seen live, and I cannot wait to see them again next week at my favourite venue in Manchester but before then- I’m going to go on about their new record.

9 songs. 43 minutes. What can you get from a record in that amount of time? What do you expect from a record in that amount of time? Well, with this record think Rowland S. Howard’s Teenage Snuff Film meets Nick Cave and The Bad Seeds’ Let Love In record. Craig’s vocals have never ever sounded better. I absolutely love the bones of this record, and I adore how you can hear so much growth in this record. The Underground Youth are one of the hardest working bands around, and always seem to be on tour. So when you listen to this record, you cannot help but think of how these songs are going to sound live. I’m already obsessed with Craig’s vocals on Last Exit To Nowhere. It’s the second song on the record, and it just blitzes its way right on through you. It doesn’t calm down after that. The Death Of The Author is a gorgeous and eerie song that sends shivers right through you.

I love how drums can give a record or a song a mood, or create an atmosphere that just spooks you. Olya’s one of the best drummers around- she has this effortlessly cool way of just beating the shit out of the drums and letting every beat shatter through your body. You move to her beat, and the way she does this is something I’ve never seen before. She gives so much tension in the way she plays, and it is the kind of tension that you crave from music. It’s the kind of tension that makes you love the band you’re obsessed with even more than you already are. In short, she’s incredible. The Underground Youth are incredible, but you probably already know that.

Montage Images Of Lust & Fear is a record that will scare the shit out of you, but will also be a record that you cannot get enough of. It’s a record that consumes you in the best way imaginable. The atmosphere on this record makes you wish you could make something like this, but let’s be honest- no one can do it like The Underground Youth. I love the romanticism in their music. It’s not the conventional and boring type, it’s something beyond anything you’ve ever known. I’ve been listening to The Underground Youth for a long time now, and with every record they blow my mind but this record has something else. It’s heavier, it’s darker and keeps you right on the edge. You can’t help but wonder what is going to happen next on the songs. You don’t know what part of the song is going to rip right through you.

Although it is a heavy record, one song in particular is on the gentle side. Too Innocent To Be True is such a beautiful and timid song. There is this wonderful gentleness to Craig’s vocals on this, and I hope they play this song on their tour because I think it’ll show a side to the band that doesn’t get shown often. It’s a mellow moment, and it fits so perfectly on the record. The bass on this song carries you away, and you just float on with it.

Blind I and Blind II feel like they could be some creepy thriller film, set in black and white. There’s something really magical about how Blind I flows right into Blind II. Blind I feels like the build up and eruption of something really bad happening, and Blind II is like the aftermath of it. Play the songs right after each other, and hopefully you’ll see what I mean. Blind II reminds me a little bit of Ghost Rider by Suicide, which is always a good thing. The song feels like a chase, and the way Craig quiets down on this song, when they do this live I’m pretty sure the crowds will go nuts especially when it picks up again. It’s probably my favourite song on the record at the moment. It’ll change though, because a record this fantastic isn’t made for you to just have one solid favourite. Every song is there to be adored and obsessed over. Each song will get their turn, I promise.

Of course I’d love more songs on this record because I just love The Underground Youth a hell of lot but with just 9 songs, they again blow your mind. Play the songs as loud as you want, listen to it over and over. Every listen will give you something new to love about the band and this record.

Montage Images Of Lust & Fear is a truly remarkable record, and for me, has left a lasting impact. It’s an absolute pleasure to listen to and just fall in love with.