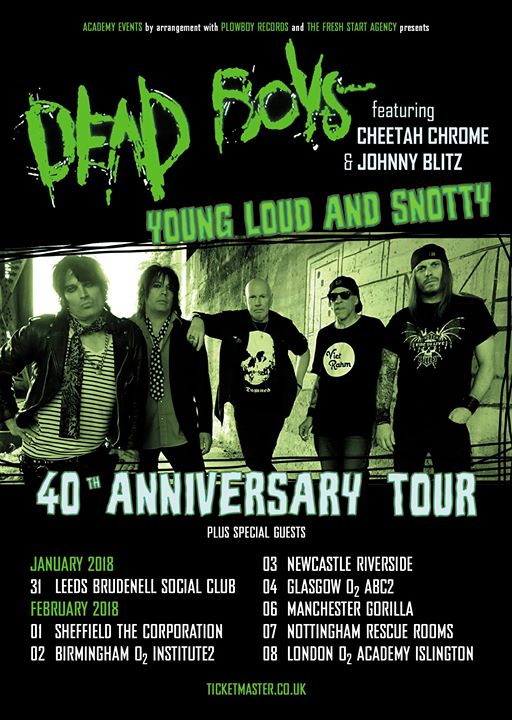 If I was someone who made a bucket list, then last night would have been something I could have ticked off. I never in my wildest dreams, and they are wild, would I imagine seeing one of the bands who made a record that I religiously play. Never would I have imagined seeing one of the greatest bands of all time.

Last night I finally saw Dead Boys play a small venue in London. It felt like we had all been thrown back to the golden year for Punk, 1977. 40 years ago Dead Boys, fronted by the one of a kind, Stiv Bators, released their debut record Young, Loud and Snotty. We all know that Stiv sadly passed away in 1990, so who on earth could come close to possessing his demeanour and way of performing the songs? It’s by no means an easy thing to do, and to some it’s probably damn near impossible but one man is doing it. And he is doing it in a way that probably has Stiv smirking down on the band. Jake Hout is remarkable, and his tribute to Stiv before dedicating Calling On You was beautiful.  His voice is incredible and he really captures what Dead Boys were about. He has that same snarly voice that Stiv had- he’s not as wild as Stiv but bloody hell he is great. For a few songs he hangs off the light above the stage. He also manages to crowd surf.

Although I was stood at the back, it was probably a solid spot to be in. I could see a sea of beautiful Punks in front of me all reliving the first time that they heard Dead Boys. I couldn’t sing the songs; all I could do was just smile like an idiot. I thought about Stiv a lot throughout, and Jake gave a beautiful tribute to him. I thought that was a really beautiful thing for him to do.

The crowd took me back to when I saw The Jesus And Mary Chain in 2014, and the crowd was mainly older men who had grown up with the band. With this show, it was a mix of everyone- and the older crowd were shouting the lyrics back at the band with as much love, passion and power as they must have done 40 years ago.

For me, I think this will be one of those shows that I’ll remember forever. There was such a lovely atmosphere, and given that the lyrical content of some of their songs may make others cringe- who cares?! The songs are as important as ever. The delivery of songs like I Need Lunch, All This And More and of course the ever influencing, Sonic Reducer is just impeccable.

I’m fairly sure last night Cheetah put a lot of people to shame with his guitar playing. He’s just as great as he was the first time around. Still loud. Why should you quieten down? You cannot tame a band like this, and why should you even want to? Johnny Blitz was as loud as ever, and that familiar sound he created all those years ago just took you back to the first time hearing the Dead Boys. The sound of the Dead Boys is massively distinctive, and to see Johnny Blitz and Cheetah- two of the pioneers of this sound, was mind-blowing.

I think with this show, the crowd and the band were equally contributing to how amazing the show was. Sometimes, you see a band and they are amazing but the crowd give nothing. This however, was such a great balance. I’m almost certain Jake would have had the crowd hanging from the lights above the stage with him if he could. I think also that if a kid who had never really heard of the Dead Boys before and was possibly only just getting into music, if they were at this show then I’m sure they would have left wanting to start a band. Like people did when they saw the Sex Pistols at that infamous Manchester show.

I was worried that the show would come across as almost karaoke like or that it would just take away the legacy of the band, and this record. But I had nothing to worry about at all. It was perfect. I could happily go see them every single night. Every night venturing closer to the stage and shouting the words back. It was nothing short of an honour to see Dead Boys and to be part of a crowd that truly idolise this band. Sometimes when I go to shows, I have this romanticised feeling of always wanting to be in that moment forever- I got that feeling last night. 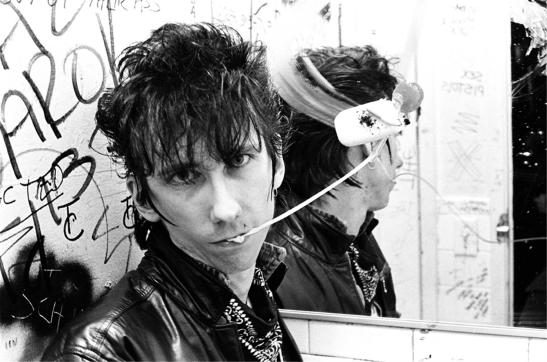 It was such a small venue, and it gave that proper Punk feel to it. All of us crammed in this room to see undoubtedly, one of the greatest bands ever. There is nothing quite like it.