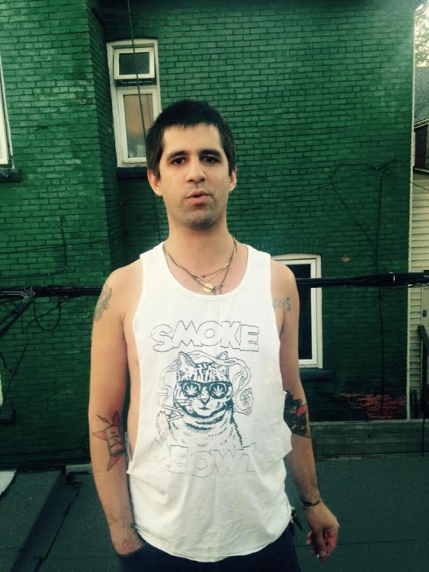 Something about the boring everyday lives we lead probably means we seek out something that has meaning. Or we just accept it. I don’t know. Maybe it’s one of those things that probably don’t matter as much as it could/should. Anyway, I’m all for escapism in all ways possible. There’s nothing better than finding a band that take you away from everything that’s going on for a few hours. By accident, I’ve found a singer that does exactly that.

Marvelous Mark is essentially a one-man band. One person who makes an exquisite amount of noise that can drown out all the things that irritate you. Besides, he’s someone you need to listen to quite loudly to really appreciate how great he is. Mark reminds me slightly of Wavves. He’s got that sense of boredom but yearning for something more in his songs, and I think a lot can relate to that. He just makes you want to pack everything in, and go on a trip somewhere. Just you and the road. Take a friend/lover if you want. Someone to talk about the music with.

I think he had a record come out this Summer and possibly at the start of the year. What’s really great about Mark is that his music just instantly makes you feel better. I’m not saying I’m magically cured of feeling less anxious/depressed (I’m on medication, I’m not just claiming to be it because an online quiz said I was!) but my brain isn’t going as fast and I don’t feel as sick as I normally do. Each symptom is different, and most days are tough. I like to find new music to make me feel better and to make life easier. It helps. Even though right now, I just want to lie in bed and stay there for a while. Mark’s music makes you feel like you’re on a sun-kissed beach in L.A just watching everything around you and taking in as much as you can stand. I love that he can create this beautiful warm sound in his music. He takes away the harshness of the world with his music, his words and his beautiful voice. He makes you wish you join his band and see the world like him.

Mark’s released his music on the effortlessly brilliant (and partly responsible for my [pay-day treats) Drunken Sailor Records. This seems like the perfect place for him to release his music as both are as passionate as each other about giving us some insanely great music. The more I listen to Mark, the more I just want to try deafen myself with his fuzzy sounding guitar style and rowdy vocals. But sadly, I can’t do that. When 4pm hits- then I probably will.

His music is truly worth delving into. Don’t start so loud and eventually build yourself up to go louder with the next listen. By the third song you listen to by Mark, you’ll probably be making your neighbours houses shake. Wake up the neighbourhood, disturb the peace- do whatever you want!

You can listen to most of Mark’s music right here: