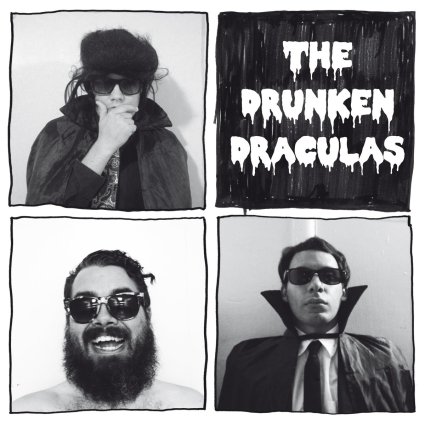 If you’re looking for a band that’ll make you shit your pants, then dance (or the other way round) then you should probably listen to The Drunken Draculas. They are part Safe As Milk (Captain Beefheart) and part A Date With Elvis (The Cramps) with something else thrown in. I can’t work out what the “something” else is, but it’s brilliant regardless.

I’m not sure what they’ve been up to recently, so I’m just basing this on past releases- and there’s a substantial amount of it for me to decide that they are nothing short of excellent. I don’t know much about the band other than they are 3 gentlemen based in San Diego. They sound like they are from a lost underworld somewhere, where daylight is a myth and blood is their poison. The songs have everything from hypnotic, hip-shaking grooves to blood-curdling banshee like yelping. The kind of band you’d want to meet in a dingy alleyway and beg them to take you into their world.

The songs sound like they could be part of some creepy Horror B-Movie. The kind that goes straight to DVD but still has an amazing soundtrack. The camera isn’t steady at all, but the music creates the mood. The Drunken Draculas are the kind of band you’d want to join. They sound like they got lost somewhere and magically came together to create this intense and lustful sound that can drive any of us crazy with the urge to hear more and more by them.  I need to hear more from them; they’re just insanely great and for the life of me, I can’t work out why they aren’t the biggest band in the world.

There’s a brilliant Psychobilly/Garage Rock sound flowing through the songs- it takes parts of bands/records I love but by no means are The Drunken Draculas a cheap rip off of anyone else. They remind me of the Count Five and The Gruesomes- they’ve got that kick to them that just sets them above most. I don’t feel like I am listening to a band from recent years (I think 2014/2015 was their last release maybe, but please correct me if I’m wrong!) They catapult you back to the 60s with their sound but at the same time, launch you into a mystical and cryptic underworld that you just want and need to be part of.

The Drunken Draculas not only have one of the best band names but they also make you believe that these guys are friendly vampires who don’t want your blood, they just want to shake you up a bit and make you dance. There is virtually nothing about them online, and let’s be honest- we don’t need to know everything about them. I have no idea if they’re still making music or not, but I do know that what they have created thus far is enough to make me want more. Their sound is exciting and different to anything I’ve heard in a long time. Some may write them off as a typical Garage Rock band, but there’s really nothing typical about this magical trio. I’m all for bands/songs that send me off elsewhere, and they do it so perfectly. I can’t describe where they take you, that’s all on the listener. But when you do listen to them, don’t settle for the four walls that trap you every single day. Let them take you somewhere else, stay there a while. Be creeped out and enjoy.

I wish I had more music by them to go on, but that’s just how it is for now. The Drunken Draculas may not take your bloody but they most certainly demand your undivided attention with their unconventional style and exquisite sound.