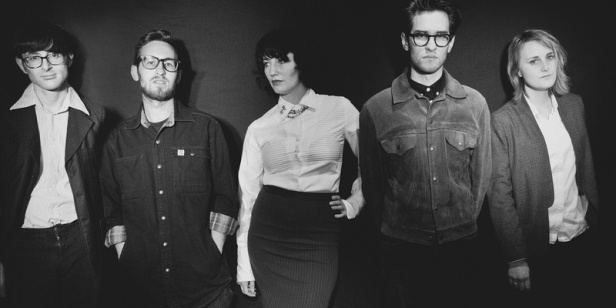 When I was at university I managed to pass off going to gigs all the time and skipping lectures as part of my degree. Sure having a degree in Music Journalism & Broadcasting can give you a passion for words and music, but it gives you a great free pass to not getting up for a 9am lecture when you’ve been to a gig the night before. Whilst at university, I struggled a fair bit with homesickness. I didn’t understand because I really hated where I lived. There was nothing for me on the Isle of Man, so I left for 3 years to do a course that would in some way, help me do something with my life. I found a few bands to cling on from 2006 to 2009 whilst there. One band in particular that got me through bouts of homesickness and general “I can’t cope” feelings were The Long Blondes. Someone To Drive You Home became a soundtrack to every single day. Certain songs on certain days were played more often than others. I never saw them live, but I did meet all of them bar Kate at a signing at Virgin Megastore in Manchester. I sat behind Screech on the train down, and he recognised me when he signed my CD. Never once did I think the band would split, and I stand by them splitting up to hurt more than a break-up. I have my reasons for this way of thinking, but music is my everything. Fast forward a few years, and I finally get to see Kate play her debut record, British Road Movies.

Out of the 3 dates they played last week, I made two of them. If I had the funds I would have gone to all 3. You don’t grow out of wanting to see bands/singers you really love at any given opportunity. If you’ve heard British Road Movies you’ll be aware of the love of motorways and service stations that Kate has in the songs. For me, that was a huge part of my love for The Long Blondes. I grew up where there were no motorways or service stations-then all of a sudden, I was surrounded by them. I’m that sad I actually do have a Top 3 service stations list. I’m always open to visiting more.

Both shows showed that not only does Kate have the most incredible voice, but her band are nothing short of amazing. Her guitarist, Reuben, plays with this insane fury that reminds me exactly of Bernard Butler mixed with Johnny Thunders. In short, he basically leaves you wishing you could play guitar like him. He thrashes it about in such a gorgeous fashion. Her drummer, Shannon,  thumps the hell out of the intro to Metropolis (second song in the set) right after the quiet tones of set opener, Velvet Sofa From Number 26. The set starts quietly, and this dramatic and intense pause occurs. This is greeted with the most rowdy drum intro I’ve heard in a long, long time. You can’t help but stand to attention but yell along “This city pulls me to pieces.”

On a personal level, Stranded and 16 Years are the songs that really do it for me. When I saw her show on Friday, I’ll admit that me and my best pal did have our share of a few drinks and enabled me to sing a long thus ruining my voice even more so (I’ve been poorly, but I’m getting better now) but her show on Sunday, I stood at the front and took it all in. I was really lucky because I went to both shows with two people I absolutely adore, and sometimes you just need someone with you who “gets” it. I can’t really explain what it is about Stranded and 16 Years that mean a lot. I guess it is certain lines in the songs that mean a lot. From Stranded I’d take “In another dimension, you’re here with me” and from 16 Year I’d probably take either “You were my release” or perhaps “I could have helped if you asked me to.” Her lyrics are gentle, thoughtful and so easy to connect with. I think this is why I’ve always held her as highly as Morrissey in my mind. I’m massively into lyrics, and people like Kate justify this love of words.

Aside from songs off British Road Movies, the band play 2 new songs- The Westerlies and Future City. Both are exceptional, and real stand out moments in the set. I’m pretty sure the recorded versions of these will be brilliant.

Kate has this wonderful presence about her stage, and I was fully expecting to witness a difference between London and Sheffield crowds- there truly wasn’t. She doesn’t draw in crowds of obnoxiously drunk louts who yell obscenities at the end of every song or during any silent moments. Both crowds were there because quite simply, we just bloody well love her. I always think live shows should take you some place else compared to where the actual record takes you. I think it’s because you can actually see the songs coming alive in front of you, and certain parts of songs become more clearer and you just go off some place else. It’s a sacred feeling, and one that was very much alive at her London and Sheffield shows.

And you know, they do say to never meet your heroes but after her show in London my friend pretty much dragged me/shoved me in the direction of Kate. And with a hug, I managed to blurt out what I wanted to say to her. Words get you through and the songs become, and save your life.