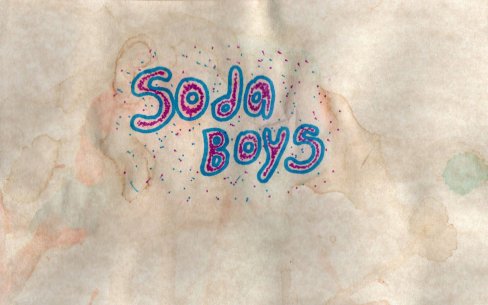 When you have next to no information about a band you immediately like and feel the need to write about, you sort of make your own assumptions about them based on what you’re hearing. But to be honest with you, I don’t want to know the ins and outs. I don’t want to know favourite colours, snacks and names of their pets. That’s no use to me. Too little is better than too much if you want your mind to work. I think mine works….

Soda Boys are a relatively new band from St Louis. They sound like a REAL Punk band. By that I mean they sound like Richard Hell mixed with the Sex Pistols and the snottiness of the Dead Boys. Their obnoxious yet playful sound is addictive, and you can’t but help smack repeat at the end of every listen. Soda Boys sound like they were around in the late 70s- not 2016! I don’t know how they’ve done it, but they nailed that pure and rowdy Punk sound. They sound like they’ve just stepped out of CBGBs and right into the belly of New York City. Is this what’s happening in St Louis right now?!

I could be wrong here, but I think their first release (and possibly only) came out in July last year. The songs are short, full of solid Punk guitar riffs and drums born out of fury. Their songs are made to be heard live, and these are the kinds of bands that make me glad I’m not deaf. Although the levels I listen to music through headphones, I probably will be if I’m not careful. I’ve always had a slight disregard for myself, it makes the day less of a chore at times. Soda Boys songs are barely 2 minutes long, and I know some may have an issue with that. There’s always someone who wants more-but you can’t have it. The songs may be short but if they lasted any longer it would take the fun out of them. We don’t always need 7 minute symphonies. Sometimes you just need a slice of rebellion that fits in under the 2 minute mark. Soda Boys have got me head over heels for their perfect Punk style.

Their songs touch on fizzy drinks, junk food and girls. Their songs make you want to pick up a brick and smash some windows. Or maybe a baseball bats and really go to town on some fancy car- whatever you want to do! Their songs eptomise youthful crushes, being bored and general hanging around. The lust for someone whilst knowing you’ve done wrong (Doghouse) to wanting someone to be yours (Soda Girl) shows that Punk was and is romantic. It’s just not the conventional type, but who wants typical/conventional anyway? That’s boring.

It’s pretty clear I know nothing about Soda Boys, but what I do know is this- they are a middle finger to those who say Punk is dead. Punk is a state of mind, a way of life I guess. I think Soda Boys are keeping the ethos of it alive and well. There will never be another Stiv or Joey, but what they gave is in bands like Soda Boys.

You can listen to the record here:https://sodaboys1.bandcamp.com/releases and it is out via Total Punk.