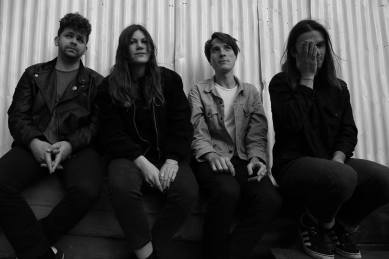 H.Grimce don’t sound like anything that’s around now. They sound like early Silverchair with the heaviness of the Melvins and the rage of a band like Savages. They also have a delicate surfer-pop kind of feel floating through their songs, especially in the title track of the EP.

Immaterial Girl will be released shortly via the ever wonderful, Soft Power. Soft Power have yet to put out something crap. Actually no, that’s unfair because I don’t want them to do that. They couldn’t anyway. Everything they release is just bloody good and could be why I whine about having no money. It’s alright, there are worse things I could spend my money on. Immaterial Girl makes you wish H.Grimace would just hurry up and release a full length record, but its not easy. It’s never easy. They’re a band who leave you wanting more with their EPs, and that’s how you get it right.

I adore the song Great Divide, it reminds me of early Hole. That’s always a good thing, I’m a fan of Courtney Love and I don’t understand how anyone couldn’t be. Well, we know why don’t we. Never mind… Immaterial Girl is a remarkable EP that as soon as you get to the last few seconds of the last track, Wasted Sun you find yourself hovering over the back button to start it the EP all over again. I’ve played Immaterial Girl a lot this morning, I’m not sure how many listens I’m up to now but there’s something massively addictive about it. Like penny sweets from the corner shop (they’re not that cheap at all now, sadly or fortunately, depends.)

H.Grimace are an exceptional band (and they come from near where I used to live) who don’t hide behind a big sound. They have this strong grip on creating euphoric moments in their songs, and Wasted Sun is definitely a prime example of that.

We need to talk about the song Imogen. Not only is Imogen the name of my Goddaughter (yes, someone was daft enough to make a Godmother, it’s okay we’ve known each other since we were 4 and we’re both as daft as each other.) The bass on Imogen sounds like it was crafted for a James Bond film. The bass creates some kind of heightened suspense and the vocals are creepy at times, it’s bloody wonderful and I’m fairly sure it is THE song that those “critics” will end up wetting themselves over, and you know what? Rightfully so.

H.Grimace will be playing Power Lunches in Dalston on 24th January (release show/fundraiser for the US tour)and after that they’ll head out on tour in America with West Coast delights, Couches. Immaterial Girl will be released via Soft Power Records on 26th January as cassette release.

One thought on “H.GRIMACE- Immaterial Girl.”