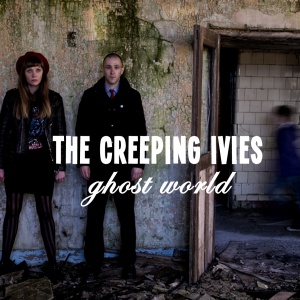 I am so excited to finally write about the new record by The Creeping Ivies, which is out next Monday.

I first wrote about The Creeping Ivies in April 2012. I immediately loved their frightening sound. I loved how they mixed the backbone of Punk with a bit of Rockabilly; and also managed to scare you. Becca’s voice does some AMAZING things, when she wails on certain songs (she does it brilliantly on The Creeps) and Duncan just makes you want to play the drums. In fact, both of them make you want to be in a band. When a band can make you feel that way, you know you’ve found something to treasure.

Ghost World is another creepy installment from this fantastic Scottish duo. It features the hits (in my mind they are) What Would Joey Ramone Do? (this is pretty much my mantra for daily life), the Valentine’s hit- Love Kills and Ramona Wolf. They’re all here, and a hell of a lot more.

Dream Baby Dream has some incredible sax on it. My girlfriend can play the sax, she’s at work- I might go get it and try cover this song. Can you imagine? I’d only have some strange accident. Maybe I won’t bother. Dream Baby Dream sounds like it should have been on some really bad horror film from the 50s/60s. I mean that with utter respect, because those horror films were actually worth watching. What you get constantly when you listen to The Creeping Ivies is the sense that you’re in a film. Their music is destined to be in a film.

Their sound, especially on this new record is just a mixture of the kinds of music that I love. This is a much-needed distraction from the soul-destroying daily task I have of looking for a job. Trippin’ Out is the perfect song that sums up the feeling of going utterly mad. Seeing things that aren’t there and feeling things crawl upon you that aren’t there. This band makes beautifully creepy music; most try too hard to sound like this. For The Creeping Ivies it is simply effortless. Of course people are going to want to throw around as many comparisons as possible, but the thing is, they really sound like nothing else.

Sure I’ve exposed my ears many times to the ghoulish sounds of The Cramps and the haunting tones of Siouxsie And The Banshees, but The Creeping Ivies are really something else. Their ability to take you to a different time with their music is something others should be envious of, better yet- it is something that they should take note of. They have this wonderful way of making you forget what year you are living in. They make you feel as if you are constantly in some old black and white film full of whirlwind romances wearing your best leather jacket.

I’m not just saying this because I’m a huge fan of The Creeping Ivies, but they are truly one of the most exciting and brilliant bands I’ve ever heard. Yes they are a duo, but that’s not just why I love their music. Their music has a of freaking you out yet makes you want to hear more and more. If I had the ability to find the word to use to describe their sound, I’d have done it by now. But I guess that’s what makes them stand out from others. Ghost World may only be their second full length record, but they just make you feel like you’ve been listening to them your whole life.

The Creeping Ivies make music for ghouls, punks and misfits- everything right in the world. The kind of music to have playing in the background as you read something by Poe with a candle flickering. Go on, have a romantic moment by yourself.

Ghost World is out next Monday (24th) and will be self released digitally on Jet Black Records. You can listen to Ghost World here: https://thecreepingivies.bandcamp.com/album/ghost-world