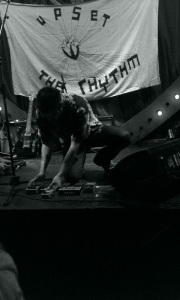 This was a long time coming. This was much-needed; it was everything. As you know I’m a massive fan of Dirty Beaches. He manages to unleash every feeling you’ve ever had in his symphonic sounds without you even being aware you were feeling that way. There aren’t many who are this powerful but the humbling thing is, Alex doesn’t even know he’s this powerful.

As soon as Alex picks up his guitar you can see just how quickly he is transported into another world on stage. I was lucky enough to be right at the front, to witness this transformation so close was something incredibly special. It was as if he was taking you with him. For this 50 minute set it was just as if the real-world didn’t matter. Why should it ever matter anyway? We have musicians like Alex who have the gift of taking us somewhere else. Somewhere where it’s okay to harbour ugly feelings or carry an inch of self-doubt or the burning desire of lust. Everything seems alright and nothing seems important when  in this world. Live music is sometimes more powerful than the record.

Alex now plays live with Shub Roy and Bernardino Femminielli (who was also support tonight and is hand on heart, on of the most entertaining singers I’ve ever seen. This guy is a character and you need to listen to his music.) I’d never seen Alex play when he was just on his own, this was my first time and it was mind-blowing. The bond between the three musicians is beautiful. Exchanging hugs after every song was just beautiful to watch- they weren’t just three people playing music to us; they are evidently a family unit. Blistering through the new record (double LP!) Drifters/Love Is The Devil, every song played (sadly they don’t play both records in full-but imagine if they did!) something clicks inside of you. You pick up exactly how and more importantly WHY this record was made. I think everything I witnessed at this gig is going to stay with me for as long as I’m alive. Like I said already, Alex has this power that is unaware of but the beautiful thing about him is how humble he is.

When I was stood at the front, I watched him set up- which is where my photo is from, and it was done with such precision. Even before he started his show, you knew something amazing was going to happen tonight. I’ve been to a lot of gigs, and I’ve never seen anything like this before. I’ve never been to a gig where the crowd (thankfully) just shuts up and stays silent. The silence is the backbone to the awe everyone feels as they stand looking at Alex. His fist-pumps to the music resemble someone who is passionately possessed by the music. Bernardio thrashes about on keys whilst Shub looks relaxed as he hits the drum machine, alternating with the guitar. All three of them drift off into another place; but you know they are heading there together. All in their own time, but they sure as hell get there.

Live music is a healing process. Not just for those who are on stage unleashing their furies, but those who stare on in amazement. I cannot tell you what I had going on in my mind as I watched this show, mainly because I was just in awe of everything before me. Nothing mattered, maybe nothing matters now. It’s about the specific moments that make everything alright. This was one moment where everything felt alright.

At the end of each song, you could see relief on Alex’s face like every song performed was just a release for him.  Anyone who is a fan of Dirty Beaches will know just how important and possibly gruelling it was for Alex to make this double record. To see it live and to truly see how much it means to him was an absolute honour to watch. This cathartic experience is something I think anyone who was here tonight will treasure for a long time, I know I will. You see, Alex’s music goes beyond just being music to me. I didn’t really feel as if anyone else was around me at the gig. I felt like I was just stood in the doorway watching someone unleash all their pure emotions. They knew I was there, and it was as if they knew I felt exactly the same. The sheer power and devotion in Alex’s voice is insane. He can have the most ferocious voice but can break your heart in a delicate note. This happened at the end of the set where he was encouraged by us all to come on for an encore. Something which he didn’t expect, again reinforcing just how humble he is.

I’d waited years to see Alex live. Things always got in the way and it just wasn’t do-able. Having finally seen someone who I regard ever so highly as a true inspiration and probably the hardest working musician around, this gig at the Workingmen’s Club in Bethnal Green went beyond all expectations. I knew I was going to have my mind blown. I knew it was going to be like nothing else I had ever seen- I just didn’t expect the aftermath to fill me with a strange sense of hope. I like to think it is hope. It is hope of the unknown. You didn’t know what Alex was going to do next, and that is exactly why we need more musicians like this. Musicians to lure us in during their live shows in a way on record you may have missed. When I listen to his records (soundtracks included) my eyes remain closed. But live you have to keep your eyes open. You cannot tear your eyes away from the stage. I didn’t care for what anyone else was doing (although the guy next to me with curly hair was really getting into the music, he really felt it) I was just taking everything in.

I probably learnt more from this show than anything else. Put everything you have into something; that’s all you can ever do. It doesn’t matter if not everyone likes it because there will always be a handful of people who do.