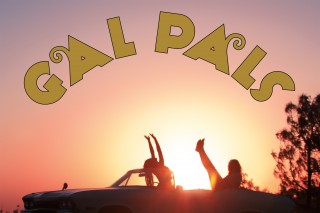 To be stuck in the past can be a terrible thing, unless it is musically. It’s alright to be stuck in 1970 wishing Iggy Pop was crowd surfing above you whilst smearing peanut butter on his torso. It’s better than living with a bunch of “if only I did this….” Give me Iggy Pop’s destructive antics any day.

In the throes of boredom and needing something new to listen to, I found Gal Pals. They remind me of very early Dum Dum Girls mixed with Ronnie Spector’s angelic voice. In short, they’re my ideal band. A drum and guitar combo- that’s a sure fire mix for a good time. They’ve got a real summertime glow to their sound. The kind of band you’d play on a road trip in mid July just as the air con in your car breaks and you want to slap the person who is driving because they should have double checked it was okay before you set off. You stick on some Gal Pals and you forget all your grievances.

Gal Pals have played with a bunch of bands I love from Girl Tears to Crocodiles to The Babies. Like a lot of bands I’ve written about, they strike me as one of those bands you need to see live to really get into the music. You get the impression that it is all played with an urgency in their live shows, and they are also another band I can use to justify my love for duos. With most still cramming in their end of year list and even though they are redundant part of me is hoping that some place Velvet Rut by Gal Pals in there. It is one of the most cheerful and feel good records of the year. Sure there are songs on the record that can catapult your mood to heartbreak but for the most part the songs just take you on a daydream to the beach, even if it’s awfully cold outside. Any band that can change your mood and make you feel like you’re going some place else whilst listening to their sounds is alright by me. As I mentioned previously they do sound like early Dum Dum Girls, and this is probably due to that 60s Wall of Sound feel. Although there’s only two of them, they have a big sound. A sound that has a gang-like feel to it. At best it is boisterous and is quite rebellious in the right places.

As I take advantage of being home alone for the next few hours, I’m playing Gal Pals as loud as I can to really experience what is in their music. For two people, they make a lot of noise and I think that is probably why I like them. If it is noisy, I’ll probably enjoy. Loud music I can deal with, loud people I cannot. Gal Pals make the kind of music that makes you want to dance around to on your own, take a road trip, take a mind trip into the unknown. You can get away to their music, which is always a good thing. Daily life can be mundane, and it is important to find things that give us a break from all of that. Songs like Dumbhead can make hopeless (or helpless) romantics go easy on themselves and feel alright in their own skin.

I have no idea what kind of sound has dominated the airwaves this year but I know there is always a place for a band like Gal Pals. One can only hope they find their way to the UK soon so we can dance awkwardly to their songs and as we make our journeys home, wish we could start our own band. The artwork to the record, I feel sums up how their music makes the listener feel when blasting it out.

You can listen to their earlier sounds here: http://galpals.bandcamp.com/