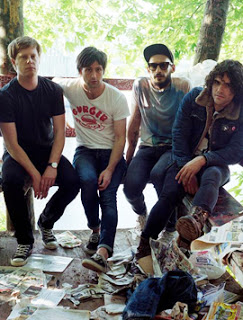 When you adapt the stance of trying to not give a shit, you need to find some music that fits with this. Music that just helps you stop caring. To stop caring about what doesn’t matter. Easier said than done, and that’s why words can be useless. Enough with the heavy, enough with not taking our own advice. Do whatever you want. Just be kind. Anyway.

Dead Ghosts are pretty damn cool. They have this relaxed sound that makes everything that’s crashing in your head seem trivial. Maybe it will end up being trivial anyway, if you don’t lose your mind in the process. I’ve probably lost mine- so much for trying to fix it. What good comes from that? Probably some. I stared at a blank screen for too long before typing any of this. It shows. Maybe I should have gone to the gym instead. It’s warmer there. Are my bones cold? My nose is. Dead Ghosts make you feel warm and as if you are in the presence of your best friend. They feel safe but still have a sound that is teetering on the edge of something unknown.

They remind me slightly of The Doors (early, early version mind) mixed with Punk. Obviously I love them, then. They are the kind of band that you probably need to see live in order to really “get it.” And if you can’t make it to a show, then you can create the scene in your mind. You can picture it, you can almost smell the stale beer being thrown around and people bashing into you in a friendly way as they let the music take them over. The fuzzy vocals echo in your ears. You’re sure of the set list so you learn the words by heart. You scream along. Sweat falls on you. It’s yours. It’s someone else’s. It doesn’t even matter.

Dead Ghosts are a band so easy to fall in love with. Well, for me they are because they’ve got everything I love about music wrapped up in their sound. There’s that slight Punk sound, some kind of lo-fi kick going on. It’s a mash up of everything I love, and the outcome is their glorious sound. A sound that makes you want to do a whole load of nothing. A sound that makes you want to make your own noise. What’s stopping you? Who is stopping you? Or you can just live vicariously through your band of choice. We’ve all done it. We all do it.

The more I listen to Dead Ghosts the more I feel like they aren’t a band from our time. They easily could have been around when the likes of Shocking Blue and The Pretty Things came out. A sound that a lot do try to emulate now, but not many have a grasp on it. Some take it too far and end up being a copy. Dead Ghosts don’t do that, not even slightly. If a band can take you from where you are, spin you around a couple of times and cast you off into another world- you’ve found a band to treasure for a long, long time. That’s exactly what Dead Ghosts will do to you.

They’ve been around for quite some time, but every listen feels like something new. Like something otherworldly grabbing your soul and pulverising you for your undivided attention as you listen to them. Let them grab you and take them where they want you to be taken with their music. Play it as loud as you can stand and drift off into another world.