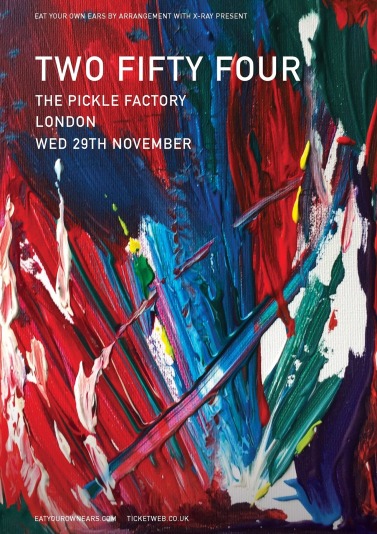 Last night was my fifth time seeing Two Fifty Four and it was also one of the best times I’ve seen them. There may have been a few issues with sound but that didn’t stop the band from putting on an incredible show.

Their last show in London was in 2015 at Dingwalls, and to see them play an even more intimate venue like The Pickle Factory (opposite Oval Space-make sure you queue up for the right gig if you go here, we made that mistake!) I’ve seen them play in an old church which is set upon old graves and at the Shacklewell Arms but the show last night was something else. Mainly because of the new songs. The new songs are outstanding live, so I can pretty much say with confidence, that when their new record does come out- it’ll be the record of the year. If it comes out next year, I am calling it now as the best thing to happen in 2018.

There is so much to take in when you see Two Fifty Four play. You don’t know where to cast your gaze as each member of the band is nothing short of excellent musicians. They will leave you wishing you could make noise like this. Certain songs allow certain band members to shine a little more, making you take in even more so just how phenomenal they are.

I always seem to gravitate towards watching Hannah play. She is undoubtedly the best guitarist around. There is no one else around that can make noise like her, there is no one else around that can make you feel that alive with a guitar. The sheer heaviness of the sound reminds me of bands I’ve been obsessed with for so long. We know that Houdini by the Melvins is one of the greatest records ever made, right? Well, Two Fifty Four carry the same heaviness as them. Hopefully you know the link between the Melvins and Two Fifty Four (play A History Of Bad Men if you don’t know, and see what happens at the 2:54 mark. If you aren’t covered in goose bumps, you aren’t human.) What I love so much about Two Fifty Four is their ability to make it look so easy, but we know it isn’t. They are one of the hardest working bands I have ever known and that truly comes through in their music and of course in their live shows.

Colette’s stage presence is magnetising. When she sings without her guitar she unleashes moves that resemble a wild animal hunting its prey- these ferocious moves accompanied with such a powerful voice that can electrify you is just mind-blowing. The only person I have ever seen with a presence like this is from my idol, Shirley Manson. Colette’s voice can be delicate when needed but she can definitely add some boom to it when needed. Her voice shows its strength on songs like In The Mirror and also on the new one, Pieces.

Of all the new songs they played last night, I think Ghosting may be my favourite. The new songs sound like Massive Attack mixed with Sleep. For me, that’s an ideal combination. The songs are delicate but also bloody brutal. Again, that’s another reason as to why I love this band so much. They have this loudness and this brutal sound that just leaves you in awe.

They end their set on Pieces, but the crowd wasn’t having any of that. We wanted one more. Some were yelling “Two more! Three more!” I think we all would have loved them to play both records and their earlier songs like Got A Hold and On A Wire. They ended their set with the wonderful Creeping. It was one of the highlights for sure; another is the little jam at the end of Scarlett. Something takes you over when they do that, and you realise even more just how bloody great Two Fifty Four are.

If you’ve seen Two Fifty Four live before, you’ll know that Alex is the best drummer you’ll probably ever see. The sheer passion that comes through as he beats the shit out of his drum kit is astounding. He makes you wish you could do that, but musicians/bands like Two Fifty Four do not come around often. I think that is why their crowd is so diverse, and why people go to see them because they truly love the band. There is none of this business where people go to see them just so they can say they have. Not at all. People go to see Two Fifty Four because their music really means something to them, because they know that they are a band to be absolutely treasured. They are also criminally underrated.

Every song they play is greeted with enthusiastic and loving cheers by the crowd. There are no obnoxious heckles or people yelling songs out that they want to hear. There is the utmost respect, love and admiration on both parts. There are no drunken fools spilling their overpriced craft beer on you, no one barging past to get to the front and no one talking whilst the band play. For as loud as they are, the atmosphere is tranquil and respectful. As someone who suffers stupidly with panic attacks- this felt like a totally safe space. All you can do is close your eyes and let the music move you.

As I mentioned many times before, bands like Two Fifty Four don’t come around too often. They are a pleasure to listen to and a sheer joy to watch. It was over all too soon, but I am so excited for the new record.

What I always take from their shows is like a kick up the arse to do something I love. Hanging out with Colette and Hannah after the show makes you see the band differently. On stage the band have this bold confidence and presence. Off stage they are taken aback with how adored they are.

Meet your heroes and let their music be your crutch. The world that Two Fifty Four paint with their music is like Ted Hughes crashing into Poe. Dark, eerie and good for the soul, and mind.