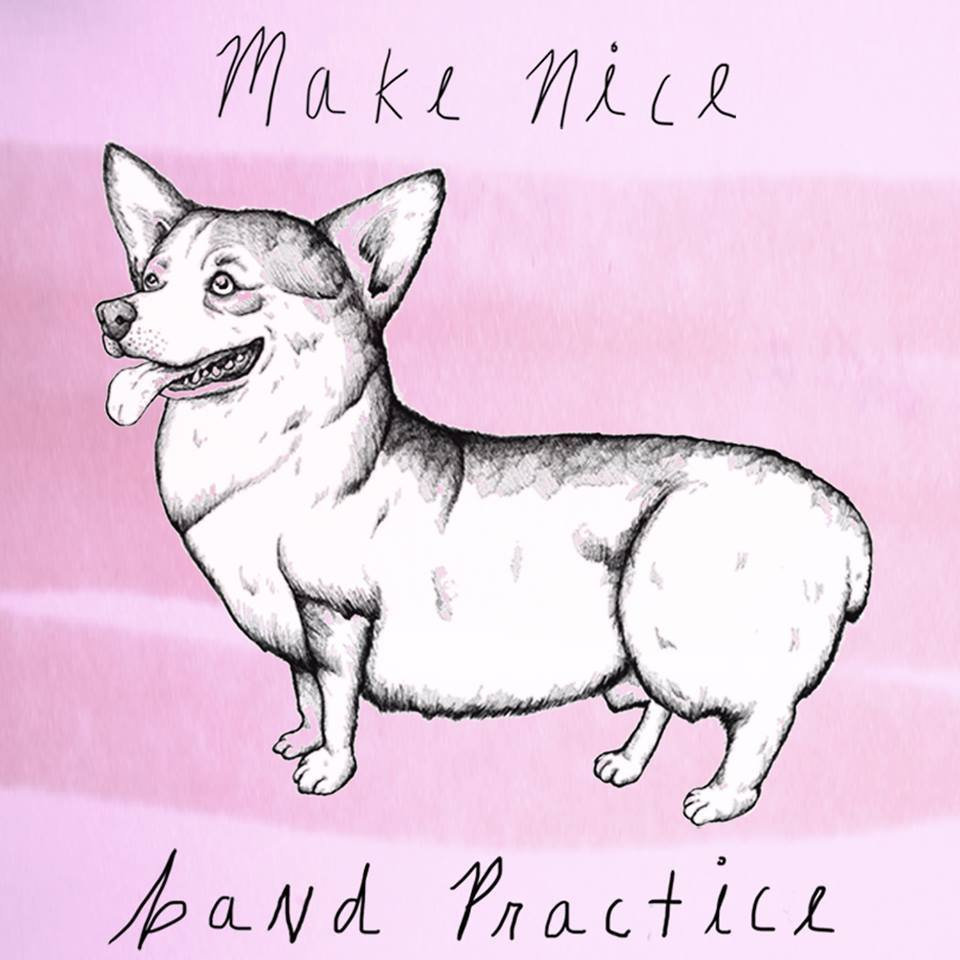 I’m currently faced with one of the most difficult tasks in life- buying a new coat. I hate all of them and I think the best solution to not be cold is to just not leave the house during Winter. If I need anything, I can just buy it online. But then again, there’s the thing of having a job and having to leave the house to get there. It’s all so difficult. You know what else is difficult? Trying to break in my new Docs. I don’t want to part with my old ones. They’ve been through a lot. I clearly don’t adapt well to change do I.

Writing about a band that I love is usually easy. When it;s a band that I’m pals with, then it feels a bit weird. Then again, if I didn’t like it I wouldn’t write about it so there’s really nothing to worry about.

Yesterday, finally, Band Practice released their debut record Make Nice came out today. If I was going to make a list of brilliant records of 2014, I’d definitely put them in there. But I’m not doing that this year, I’ll do lyrics instead. Anyway. So the record came out today and it’s ridiculous.

Band Practice are Ben and Jeanette (she does The Miscreant magazine. I write for them, she’s awesome as is the magazine. She didn’t tell me to tell you that, I felt like it.) JW’s voice is beautiful.

The songs are everything you thought high school would be. For me, it was nothing like it. There were no crushing crushes, nothing of the sort. I was and always be an average bore. Band Practice have provided songs that will ease anyone out of their awkward stage, or in adulthood- make it easier to deal with.

The 9 track record starts with the awesome Band Practice Theme Song. JW pays a little homage to wonder kids Comfy in the line, “This is my big comfy scarf.” This is the perfect track to open Make Nice with. But I want to talk about my ultimate favourite off the record, Bartending At Silent Barn. It’s full of wonderful self-doubt and I’m pretty sure anyone who listens to it will relate to it a hell of a lot. I adore the line, “Nobody in my head likes me so sometimes I get lonely .” It’s such a sad line, and I’m fairly sure why I love it. I tend to go for lyrics that are quite self-loathing and the like. I love the way JW sings this song, and I feel a bit awkward talking about how she sings! I love how there’s a bit of a fed-up feel to her voice at the start, then a little giggle happens (I think it’s a giggle) and the song just smacks you beautifully in the face. The drums, always the drums isn’t it.

Band Practice have basically put a record out to fit every mood. If you want to sulk in your room, stay in your pjs and never see anybody again- this is the record for you. Ultimately,  you can also flail your limbs about to some of the tracks without a care in the world. Do a mix of all of them, but make sure you don’t overlook the lyrics. The lyrics are gorgeously crafted, and yet again, another band that make me wish I had even a small fraction of musical talent. Alas, I don’t. I just do this instead. Some of the songs will break your heart (Spare Parts) but really, what you’ll adore are the quick-witted lyrics sung by Jeanette and Ben. See, this is why duos are just the best.

Make Nice has been released by the great Chill Mega Chill, and you can buy the tape/download it here: