Live music is a powerful thing; seeing your two favourite bands live on the same night is truly something else. You don’t always think it will happen, but when it does you immediately feel part of something. And as an unsure and uncomfortable 27-year-old, I can safely say that music makes me feel part of something. I’m not sure what, but it’s just me and some music. I guess it’s not really anything at all, but we cling onto what we have because we’ve been without for so long.

Before the show I interviewed Dee Dee in the toilets backstage and we shared some whiskey. I’ll write it up over the weekend, when I feel like I am able to do so. It’s one thing to have a quick photo with a band you admire but it goes beyond words when you get to talk to them for half an hour about their music, Patti Smith amongst other things. I’ve spent part of today wishing I had asked Dee Dee some other things, but maybe next time. Who knows.

Both bands are very dear to me, and to finally see them live together was a beautiful experience. Crocodiles set was just Charlie and Brandon, just like how they first started. I never got to see them live as a duo, so this was really special. What did it for me was Jet Boy Jet Girl, a cover song originally done by Elton Motello. The song oozes sexual decadence and sinister wit, themes which sometimes flow through songs by Crocodiles. A brilliant cover and sounds even better live. They even played one of my favourites from Sleep Forever; Hollow  Hollow Eyes. Their shows as a duo is equally as passionate and as bold as it is with a full band, and for me it was a pleasure to witness live as I fell in love with their sound back in 2009 when they were still performing as a duo. It was honestly like falling in love with your favourite band all over again. I’m fairly sure I could have worded it better, but if you were there and you love them as much as I do- then you’ll know exactly what I mean.

Watching Charles play the guitar is totally mesmerising, he just makes you wish you could hold a guitar and play it in the most brutal way possible. Throw Brandon’s haunting voice in there, and you’ve got a solid duo that have a sound that towers over the mundane shit you are exposed to. Crocodiles music really comes to life when you see them live. They are quite simply, a band you’ve got to see live. Brandon and Charlie make you want to find a like-minded individual and make your own noise; it’s never too late. Remember that. It’s so good to see both of them lose themselves in the music; Charles throws his guitar about and Brandon gloriously flails his limbs on stage. I just love their sound. 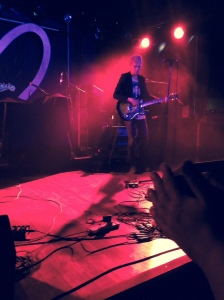 *My photo but not my hand.

I don’t know where to begin when writing about Dum Dum Girls, but they take to the stage and open with the gripping Mine Tonight. End Of Daze was (and of course still is) a truly beautiful EP. An EP that makes you want more and more from the band, but is also the perfect way to follow-up on previous releases. The setlist from their Scala show was nothing short of perfect; from the enthusiasm that echoes throughout Bedroom Eyes to the sheer romanticism flowing through Rest Of Our Lives. What I adore about Dum Dums is that when you see them live, you really do witness a band that love what they do, and of course, they love each other. The thing Dee Dee wanted the crowd to take from this show (and the rest of the tour) is love. Love for each other, for their fans and for what they do. As you watch them on stage each of them fall into the music in their own way. Malia moves freely on the stage with the bass, Sandy beats the shit out of the drums and leaves you in awe of how someone can play like that, Andrew sways at the back in an angelic fashion (and has beautiful hair), Jules smiles at the crowd as she sees those who are really feeling the songs and Dee Dee prowls the stage like a wild cat. Each of them lure you in with their sheer passion for what they do. If you don’t love what you do, then don’t do it. 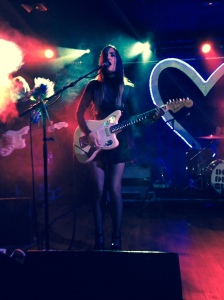 Like Crocodiles, Dum Dums are a band I would (and won’t) ever grow tired of seeing live. The way the songs come to life on stage is enough to make you have a little cry. I’m not ashamed to admit I got teary eyed during Are You Okay (it’s the “I’m reckless at night, I’m sorry for days”line that really hits me in the heart) and of course, the last song of the night Coming Down does something to me that not many songs do. Anyone who has heard this song knows which part exactly that does something to them. As soon as Dee Dee hits that high note, you feel weak but also a wave of strength hits you. Coming Down is a song I turn to when everything just seems askew, and to finally witness it live and to sing it back to the band is a gorgeous experience. If you’re going to do a review of a show, you might as well put your all into it. I really don’t get why you wouldn’t. I wish I had the money to have gone to more than one show, because they really are one of the strongest bands I have seen live. To see them lose themselves in the music and to bring it all to life is nothing short of inspirational.

*Again, not my hands!

One thing I have noticed (okay so I’ve only seen them twice) is that those who attend a Dum Dums show make for a lovely crowd. There is no dickish or loutish behaviour. People are there for the most important thing; the music and the love for it.