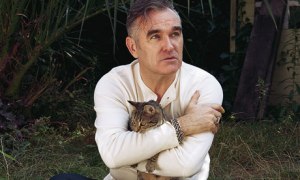 Well into adulthood, you’d think by now I’d understand more and just be more certain. I’m indecisive and I don’t care. I’d rather sit in silence with a book than anything else. I really like the quiet. However there are some sounds that please me. One being the voice of Morrissey. I know I bang on about my love for him, but it’s a love that is ever-growing. A love that goes beyond being love. It is based on an understanding. An understanding that only Morrissey fans can understand. I know a fan is a fan regardless, but I mean the fans that have saved up to see him in the middle of nowhere or have cried in the foetal position whilst listening to I’ll Never Be Anybody’s Hero Now. Or have used Bona Drag as a crutch. Or trust in every word written on Viva Hate.

When I have my daily dose of “I hate my reflection” I think of a Morrissey song to drag me through the day. My thoughts consist of things such as “If I was a dog, what kind of bark would I have?” or a Morrissey lyric. My vacant stares are due to me being preoccupied with daft thoughts, but I am harming no one. I am troubling no one. I have these strange bouts where I just have to write about Morrissey. Of course I listen to him everyday, I just have to. I cannot explain why, but I just have to.

You are born to be some things. You are born into some things. I was born into being a Morrissey fan. I remember hearing the haunting sounds of Johnny Marr’s guitar at an extremely young age, but not really caring for it. I was more interested in the man flailing about on stage with some flowers in his back pocket. Obviously The Smiths split up before I was born, sort of. But I remember seeing an old clip on TV once, and hearing John Peel play a session that The Smiths did for him. Yet, when I heard his solo stuff that was it. I think it was November Spawned A Monster (apt I know) and seeing him thrust about and using a bar of chocolate as a musical instrument just left me in awe. Since that day, I have been in awe of him. Like I said, it goes beyond being love.

I don’t know how I feel about the concept of role models, I really don’t. I believe you should be the one who guides you. Yet we all need help don’t we. Morrissey’s words to me are like what a religious person uses their chosen religious book for; guidance. I have wept to Ringleaders Of The Tormentors more times than I can count. Everyday Is Like Sunday sums up where I sadly live. Suedehead oozes the disdain I feel towards some. To Me You Are A Work Of Art makes me think of the one I am most fond of. Basically, he’s the root connection to most things.

I first saw him live in 2009. First heartbreak, endured a 5 hour train journey to Stirling in Scotland with my mum to see him. The curtain fell and he walked on stage. Tears fell. Proper tears as if someone had told me the worst news possible. They were tears of joy. They were tears of finally seeing the person who saved my life right before me. I’ve seen him four times, and every single time I have seen him the tears started at the same time. Butterflies erupt in my tummy and tears begin to fall as David Johansen (New York Dolls) on the projector screen appears as I know as soon as he finishes, my hero is about to walk onto the stage and save my life once more. There’s consistency, then there’s Morrissey.

Of course I get defensive when someone slags him off, it’s like protecting a family member isn’t it. You don’t take too kindly when someone says ill words about someone who is your true beacon of hope. Yet, if everyone loved him I’d probably be annoyed (as would he I imagine!) When I hear “Oh he is so dull.” It does make me  annoyed because if you want dull, I suggest you play Radio 1. That’ll present you with enough dullness to make you sick and shudder at the thought of ever turning your faithful wireless on again.

I Have Forgiven Jesus is a song I frequently turn to. I’m not religious, it is just the words. “Why did you stick me in self-deprecating bones and skin?” If I was ever asked what lyric sums me up, that’d be the one I’d quote. Easily. So true, after all these years and all the songs I have ever heard and will ever hear; this is the line that is etched upon my heart and lodged into my mind more than others. Then again, most of Speedway sums up everything. I guess it depends on the day. Maybe I’d shrug it off and just quote something by Girls Aloud.

I’ve been asked many times, “What would you do if you met Morrissey?” I have no idea. Of course I’d like to think I’d be okay and not cry. Truth be told, I’d probably bawl and just ask for a hug. I’d simply say his songs are my life and just thank him. He’s done so much that words just do not offer enough. Then of course, he’d shyly smile and it’d be awkward in the most delicate way possible.

The world is full of things and people who will test you and push you. The world is made to cause issues and to solve them. People will tell you that you are wrong. Based on life choices and way of living. A swift middle finger salute to them is more than they deserve. Then quote Alma Matters at them; that’ll shut them up.

For those snow filled days or wasted summer days, there is a Morrissey song to sum it up. The love, lust, losses and gains; he’s got a song for it all and then some.

I have written so many words about him and I will never feel they are enough. This is just another outburst of love for the one person who saved me. I’m not sure what he saved me from. Or maybe I am and just don’t feel the need to get THAT personal. I’m not sure. All I know is that he reinforced my love for words. I may never ever get paid to write. And maybe if I was to get paid, it’d ruin my love for it. I’d rather have nothing than be unhappy. It’s better to be without the things that can ruin us. Music saves. Music is everything. As is Morrissey to me (and to others of course.)

This won’t make sense to anyone that isn’t a Morrissey fan, but that’s okay. It was just an outburst of love, as ever.