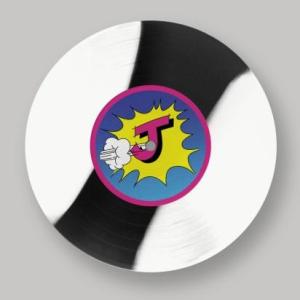 Need a new band? Here’s a bloody good one. Jacques Caramac & The Sweet Generation. Brilliant name, brilliant band. From London, Scotland and France. They’re obviously going to be wonderful aren’t they? Of course.

They’ve got a song that I have heard on Marc Riley’s show on 6Music. I always trust Marc’s judgement, and he only plays amazing music. But there was something about Jacques Caramac that stood out for me. I’ve been seeking out a lot of new bands recently, but these guys just have something that is above the others. I hate the word “fun” it’s on a par with “nice.” Dull words with no meaning. And the word “good” just doesn’t do them justice. I love them because they’re like an accessible version of The Fall. Now, The Fall aren’t to everyone’s taste (personally, I love them.) Their jaunty sounds and accent filled vocals (I mean you can understand the vocals) means you just connect instantly.

With such a sweet name (sorry) their music is far from sickly. You can indulge in their music over and over without feeling like you are going to be sick, that’s always a good thing. This is just proper good music that deserves to be massive. The songs need to be chanted back at them. Which you can do so on the 9th January when they play Hoxton Bar & Kitchen in London. You should get yourself down there, free pick ‘n’ mix on the door (not really..I just made that up. But you should still get yourself down there and see them.)

Their debut record is set to be released in April next year, it’ll probably be one of the best things you hear.

Until then, you can indulge your ears on It Takes All Sorts, which out on the 10th December : https://soundcloud.com/#user5864538/jacques-caramac-the-sweet-1

Of all the press releases I’ve ever read, I think this piece from theirs is my favourite I’ve read in a long time :

“JC & TSG have now finished recording their debut album (due April 2013), all about searching for a place where life is sweet. Full of songs that are simultaneously buoyant and bitter, and they’ll get you higher than a Kendal mint cake.”

If that doesn’t turn you on, then I have no idea what will.

Basically, if you’re a massive fan of The Fall and Velvet Underground then not only do you have excellent music taste, but you should (hopefully) love Jacques Caramac & The Sweet Generation.

It Takes All Sorts (split with Cadbury’s Voltaire) is out on Everyday Life Recordings.