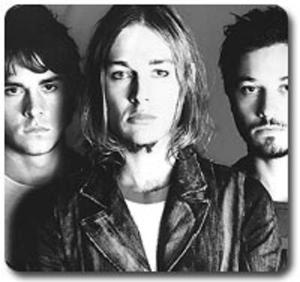 “It’s only self rejection, with a mean left.”

I’ve tried writing this about five times now. Maybe it’s a sign that I shouldn’t bother. However, I feel I have to. Not many will care for this band. I can’t see how a person couldn’t, but I’m just being biased. I love this band more than I can even understand. About a year ago they called it quits. What do they call it..a “hiatus.” That’s the really bad H word isn’t it. I don’t know what the other one is really. Anyway, Silverchair. A band that dragged me through secondary school when all I wanted to do was never see a face again in that hell hole. If you were ever bullied, you’d understand. But I got tough and..hid in the library. Story of my life really. So, when they announced this break they were going on, I felt a bit of my heart crumble away. Much like it did when The Long Blondes broke up. Except, I never got over that. I never have and I know I never ever will. Silverchair saved my mind. I owe it to a friend. I remember her showing me the cover to Freak Show, and she let me borrow the CD. I went home and had it on repeat. Did it change my life? I think it is fair to say it did.

For me, Daniel Johns is one of the greatest guitarists ever. Although I fully appreciated the band’s musicianship it was the lyrics that made my head spin and my heart feel less alone. As I got older, certain songs became everything I felt but couldn’t vocalise. Miss You Love for instance was a song that held so much relevance for a long time. I guess it still does. For me the song is about someone who has no idea what to do with love. I’m not entirely sure if I know what I would do, or if I ever will. I think most are like that. We have a view on ourselves to make ourselves attractive to others. I’ve gone past that. I’ve never been one for impressing another person. I wouldn’t know how to do it. If you’re impressed by someone who can do an impression of some South Park quotes or can recite Edgar Allan Poe or John Cooper Clarke poems- then I am available. Not for much though, I’m fussy. I think? I don’t know. Just don’t be a cunt.

Their lyrics summed up angst ridden teens everywhere. Thing is, you can still be an angst ridden adult. It just seems to be frowned upon. Or you are called grumpy. I’m not grumpy (please don’t wake me up if I’ve said I’m going for a nap though) I just hate unfairness, and I like to point it out when I see it. Songs such as Emotion Sickness and Anthem For The Year 2000 really do touch on being massively pissed at society, and quite rightly so. They didn’t word songs in a way that nobody couldn’t connect to. What you MUST remember is how young they were when they started out. They were living out the frustrations. Sadly, Daniel Johns was living out his own nightmare. Yet he came through the other end. Truly showing himself to be a person well worth looking up to, I know I did. And I still do.

Aside from being pissed at society, the self-deprecation in their lyrics made them easy to connect with. All too often, when growing up you are told to dress, think,feel,be,act a certain ways. You aren’t encouraged to think and speak freely. You have a limit to your freedom, that alone can cause so much fucking frustration inside. They ripped out all your frustrations and put it out there. They hung out every ugly feeling possible, and you felt less alone. You felt less disgusted with your own reflection. Am I the only one who feels this way about them? I hope not.

Hand on heart, Neon Ballroom is one of my favourite records of all time. It is heartbreaking and it is a healing process. I recommend anyone who feels a bit lost to invest in this record. It may not fully cure you, but it will ease the tension you have inside.  Every song is dark, but you find bits of hope in this record. You find them in weird places. That’s the good thing about music, you can find a way to plough on through in places and sounds you never thought you could. It used to be a record I couldn’t listen to often because of all it meant to me. As I get older (still a bit lost) I see the record for what it is. A reflection of a generation that needed to be heard. Silverchair were the voice for so many, and I hope they still are. They’re a band that you connect with so deeply that introducing them to a friend seems like a hard task because of the lyrics. You know it’s easy to go up to someone and say, “Hey have you heard the new song by The Strokes?” or something because The Strokes are a band that you can listen to over and over- no part of you will feel an ugly amount of pain when you listen to them. Listen to certain songs by Silverchair and you may feel a wee bit fragile afterwards. They’re not a band for those who love upbeat, happy pop songs. Far from it.

Yet, there was positivity to be found on Young Modern. I’ll be honest with you though, I really didn’t enjoy that record. I don’t need to go into detail as to why I didn’t. It just happens I guess doesn’t it. You cannot like everything.

Silverchair, unlike most bands that firmly have a place in my heart didn’t win me over like the other did. They didn’t make me want to write. Instead, they made every angsty emotion I was carrying around less daunting. Less heavy to carry. They made, for most of my time at school, it easier to wake up every day and drag myself there. I guess you can say they kept me alive, in a way. They started out when they were only 12 years old. For a band to write songs like that at such a young age is not only incredible, it is inspiring too.

They may never make another record again, but what we do have is enough to still fall back on when everything seems a bit messed up.